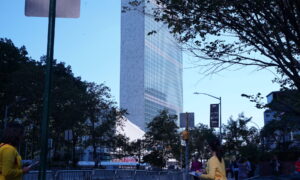 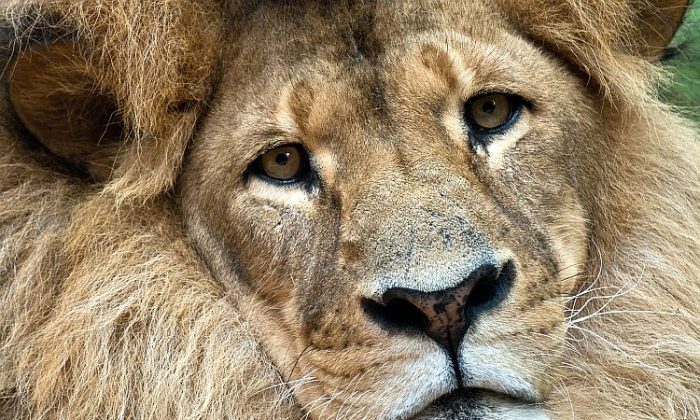 The world’s African lion population has dropped dramatically over the past 30 years. The animal's latest threat is American gastronomes. (Manan Vatsyayana/AFP/Getty Images)
US

CHICAGO—In 1916, poet Carl Sandburg memorialized Chicago as “hog butcher to the world.” Now, one Illinois lawmaker wants to stop the city from earning a new reputation as lion butcher to the country.

State Rep. Luis Arroyo (D) is behind the proposed legislation—the first in the nation to outlaw lion meat. Under Arroyo’s plan, anyone caught selling or slaughtering African lion (Panthera leo leo) would serve a year in jail and/or pay a $25,000 fine.

“I know there are a lot of exotic pets that people eat, but we don’t want to eat the king of the jungle,” Arroyo said at a Brookfield Zoo press conference last month. “I think the economy is not that bad in Illinois that we have to go start consuming lions.”

Recession jokes aside, the taste for lion is more about exotic allure than tough economic times. For the past few years, choice cuts of the big cat have been served at restaurants and butcher shops across the country, offering diners an authentic taste of a majestic carnivore.

While U.S. lion meat is sourced domestically, the wild lion population has dropped dramatically over the past 30 years as the cat’s access to prey and habitat has shriveled. Trophy hunters further chip away at lion numbers, but gastronomes are a recent threat, as lion meat is not found in traditional diets.

Lion meat gained notoriety in 2010, when Il Vinaio restaurant in Mesa, Ariz. served up a lion burger as an unintentionally ironic homage to South Africa hosting the World Cup. Other lion-themed selections soon followed at Flaming Grill Café in Sacramento, Calif., Savenor’s Butcher and Market in Cambridge, Mass., and the Serbian Crown in Washington D.C.

Restaurants seeking to serve lion are likely to look to Chicago. Investigators found that where ever lion meat was served, nearly all the nation’s purveyors pointed to the same source: one Chicago-area farm and a handful of nearby butcher shops.

Whether it’s served as a gimmick to draw customers or for purely culinary interest, lion meat has drawn complaints and petitions from animal rights groups.

But lion meat supporters argue that as long as the big cats are farm-raised and deemed fit for consumption, what’s the big deal?

“There is no regulation on the way that lions are slaughtered to provide meat for human consumption,” said Roberts in a phone interview. “From a human health and safety perspective, we don’t know how these animals were treated and what they were treated with.”

Some restaurant menus have advertised their meat as USDA-inspected free-range lion, but no evidence supports this claim. In 2011, Born Free conducted a year-long investigation into the lion meat trade and found that regulatory oversight was practically non-existent.

While a good portion of lion meat may come from animals raised strictly for consumption, Roberts said it could easily be a byproduct of the skin trade. Some slaughtered lions may have originally been pets or a featured attraction in roadside zoos.

The meat’s backstory and drug history remain a mystery because officials at the U.S. Department of Agriculture (USDA) and the U.S. Food and Drug Administration (FDA) both claim that lion meat regulation is not in their purview.

“It’s almost as though these two agencies, USDA and FDA, are pointing fingers at each other,” Roberts said. “No one is really taking responsibility for making sure that either the lions are slaughtered humanely or that the meat is actually safe for human consumption.”

Chicago area butcher shops known to have sold lion were not eager to share their opinion of the proposed ban with the Epoch Times. Richard Czimer, owner of Czimer’s Game and Seafood in Homer Glen, Ill. was particularly reserved.

“As a policy I do not talk to reporters,” said Czimer when telephoned. “I’ve been done wrong by them and you are now suffering the consequences.”

Czimer has good reason to be guarded. His wild game butcher shop was found passing off endangered tiger meat as genuine lion in 2002. He was sentenced to six months, and forced to pay Save the Tiger Fund $116,000.

African Lion meat is still on the menu at Czimer’s—Tender Loins, $24.95 lb.—although the website says the selection is not available.

Unlike the tiger, the African lion has not been officially determined an endangered species, but many wildlife experts believe it should be. Lion numbers have declined more than 50 percent since 1980, and the animal has vanished from over 80 percent of its historic range.

Born Free and other wildlife organizations recently submitted a petition to include African Lion on the Endangered Species list. Rep. Arroyo is also pressuring Washington to update the list. If lions were on the list, it would give his bill greater impact.

“The African lion is an imperiled species,” said Roberts. “The more people are desensitized to the risk that lions face in the wild because of the availability of lion meat the worse off the species is going to be, especially if demand for lion meat increases.”