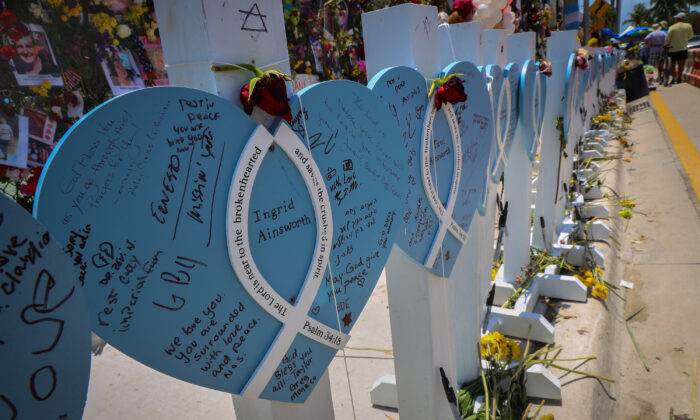 Wooden hearts with the names of victims are erected alongside the photos, flowers and other memorial items for victims of the Champlain Towers South collapse in Surfside, Fla., in a file photo. (Carl Juste/Miami Herald/TNS)
Crime and Incidents

By David Ovalle and Charles Rabin
From Miami Herald

Arrested were Betsy Alexandra Cacho Medina, 30; Rodney Choute, 38; and Kimberly Michelle Johnson, 34. They are being charged with organized scheme to defraud and multiple counts of identity fraud.

Law enforcement officials are expected to detail the investigation later Wednesday at a news conference at the Miami-Dade State Attorney’s Office. The probe was conducted by detectives from Surfside, Aventura and Miami-Dade, as well as investigators from the U.S. Marshals, the U.S. Secret Service, and the Postal Inspectors.

The development comes more than two months after Champlain Towers South suddenly collapsed in the middle of the night, killing 98 people in one of the worst building failures in U.S. history. The cause of the June 24 collapse remains under federal and state investigation, although experts have pointed out that there appeared to be flaws in the structural integrity and design of the building.

About a month after the collapse, relatives of the dead began reporting that thieves were taking out credit cards in the names of their loved ones.

The sister of one victim killed in the Surfside condo collapse told the Miami Herald in July that she first noticed strange emails popping up on her sister’s iPad the night before the funeral. The emails detailed password changes to bank accounts and credit cards, new addresses and contact information, withdrawals and expensive purchases.

“I was home writing the eulogy. I don’t know why, but I looked down. I saw notifications from Wells Fargo. I saw emails with money transfers. I didn’t even know she had a Wells Fargo account,” she said. “It was crazy. These people are professional. Who would do something like this?”