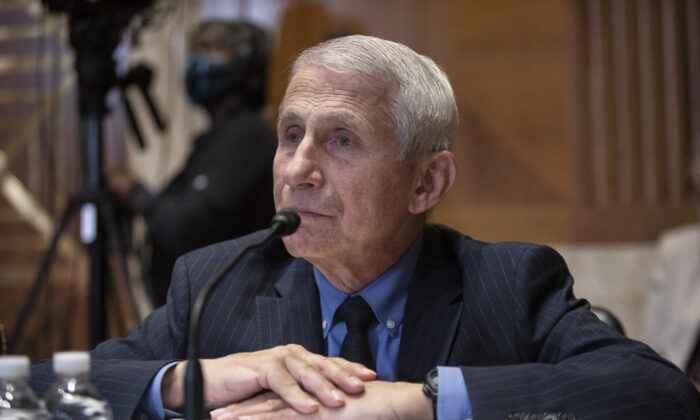 Dr. Anthony Fauci, director of the National Institute of Allergy and Infectious Diseases testifies during a Senate Appropriations Subcommittee on Labor, Health and Human Services, Education, and Related Agencies hearing on Capitol Hill in Washington on May 17, 2022. (Anna Rose Layden/Pool via Getty Images)
Executive Branch

‘I Believe So:’ Fauci Says School Closures Were Worth It

Dr. Anthony Fauci says shutting down schools during the COVID-19 pandemic was worthwhile.

“I believe so for a number of reasons,” Fauci, the longtime director of the National Institute of Allergy and Infectious Diseases and a lockdown proponent, said on Sept. 22.

Fauci said that people who note that many children do not suffer severe cases of COVID-19 disregard that “we still lost 1,400 children.” As of Aug. 20, only 722 deaths among children were determined to have COVID-19 as the underlying cause, according to the Centers for Disease Control and Prevention’s WONDER database.

Fauci also put forth the theory that COVID-19 vaccines can prevent multisystem inflammatory syndrome in children, or MIS-C, and so-called long COVID, or lingering effects that are sometimes attributed to COVID-19.

“So although you have to be aware and not deny that there are deleterious consequences for prolonged periods of time for keeping children out of school—remember, the safety of the children is also important,” Fauci said. “So it’s not black and white, it isn’t completely right or completely wrong. The people who have concern[s] about closing schools are perfectly appropriate in that concern. That’s the reason why I have said very, very often: we need to do everything we can to make sure the schools are open and safe.”

Fauci was speaking during the Texas Tribune Festival.

Fauci’s comments come after he claimed that the harsh measures imposed by states and locales, backed by federal health officials like Fauci, were necessary because hospitals were being “overrun.”

“And sometimes when you do draconian things, it has collateral negative consequences. Just like when you shut things down, even temporarily, it does have deleterious consequences on the economy, on the schoolchildren. You know that,” Fauci said at The Atlantic Festival.

Fauci previously said he wasn’t sure whether shutting down schools was worth it. “Only time will tell,” he said in May.

Critics said Fauci’s insistence that the United States needed to shut down schools disregarded many studies that show that schools are not locations where COVID-19 spreads much.

“Dr. Fauci has a shocking lack of understanding of the collateral harms of the school closures he recommended. These include immense learning losses from two years of closed schools that will cause countless children to future poverty, and consequently shorter, poorer lives,” Dr. Jay Bhattacharya, a professor of medicine at at Stanford University, told The Epoch Times via email.

“These harms have fallen with particular force on poor and minority children coming from families without the means to afford expensive alternatives to zoom school. With his blindness to the lockdown harms he caused, Dt. Fauci should never had the commanding control over American educational policy that he has had for the past 2.5 years,” added Bhattacharya, one of the original signers of the Great Barrington Declaration.

Keeping schools open in Sweden helped children there avoid learning loss, according to a recent study.

Rep. Mark Green (R-Tenn.), a doctor, said that Fauci’s acknowledgment that harsh measures have consequences means he “knew your children would suffer. He ignored pleas to open schools.”

Republicans have vowed to probe Fauci if they flip the House of Representatives in the upcoming midterm elections.

“We won’t fully understand the generational consequences of his actions for years,” Green said. “Accountability will come.”