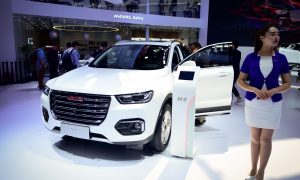 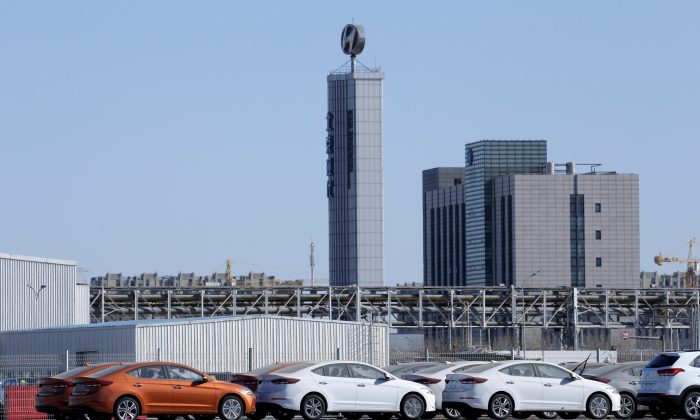 Hyundai cars are seen at a plant of Hyundai Motor Co on the outskirts of Beijing on Jan. 25, 2019. (Jason Lee/Reuters)
Companies

SEOUL—Hyundai Motor Co. is considering plans to suspend production at its oldest plant in China, the South Korean carmaker said March 6 as it reels from tumbling sales and massive overcapacity in its biggest market—factors caused by China’s weakening economy.

The move by Hyundai, which, together with affiliate Kia Motors, was the No. 3 automaker in China until 2016, highlights the reversal of fortunes of China’s auto industry.

“Hyundai Motor is reviewing production to enhance competitiveness and profitability,” it said in a statement, adding that the plan includes “suspension, not closure of Plant 1 in Beijing.”

The company, which has three manufacturing plants in the city, said that it has yet to decide when a suspension would start. However, the Korea Economic Daily newspaper reported that suspension could start as soon as next month.

All of Hyundai’s five factories in China are operated by its Chinese joint venture with BAIC Motor Corp., at which about 2,000 employees have taken voluntary retirement or transferred to other factories, the statement said.

China’s auto industry has been slowing after a period of strong growth, hit by a weakening economy and the fallout of trade frictions with the United States. China’s car sales contracted for the first time since the 1990s last year and Hyundai’s sales in China amounted to only half its total production capacity in the country.

China’s car sales had fallen the most in almost seven years in September 2018, declining about 11 percent to 2.39 million units, according to the China Association of Automobile Manufacturers.

A bleak outlook as China’s economy slows has prompted many automakers, such as Nissan, to cut production in the country or, as with Suzuki Motor, even exit it.

For Hyundai, troubles have been exacerbated by a diplomatic row between Seoul and Beijing that hit demand for South Korean products in China.

In 2017, China’s state-run media made an all-out effort to advise citizens to boycott South Korean products, after South Korean conglomerate Lotte agreed to lease some land to host THAAD, a U.S. anti-missile defense system installed in the wake of increased North Korean nuclear testing. The military installation angered Beijing, claiming that the anti-missile system could be used to spy on Chinese airspace.

A lack of attractive models and strong branding also makes Hyundai vulnerable to competition from both Chinese and global carmakers, analysts and dealers have said.

Hyundai will produce its new ix25 SUV at its latest plant in Chongqing beginning in September, according to an internal document seen by Reuters.

The current ix25 is made at the Plant 1 factory built in 2002. The model is Hyundai’s second-biggest selling SUV, with sales reaching more than 75,000 last year, company data showed.