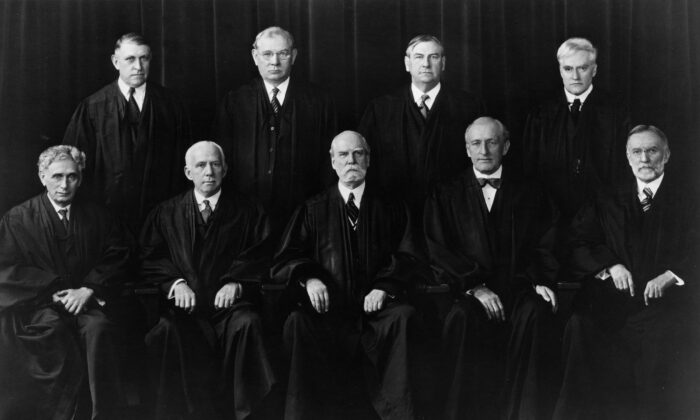 How the Supreme Court Rewrote the Constitution: 1937–1944

Part II: The Stage Is Set

The first installment in this series described America’s limited and frugal federal government from 1789 until the 1930s. This second installment explains how the stage was set for radical change.

In October 1929, a financial bubble broke. As always happens when financial bubbles break, people lost a great deal and hardship ensued. But bubbles had been breaking for centuries. Wise people knew that in financial panics, most government intervention does more harm than good. They had learned that the best solution was for government to assist private charity in relieving the destitute, but otherwise allow the economy to reorganize and recover naturally.

However, most people aren’t wise. In times of hardship, they insist that government “do something.” Officeholders respond according to a classic political syllogism:

We must do something!

Therefore, we must do this!

Unfortunately, “this” almost always exacerbates the damage or, at best, comes too late to be of much (or any) benefit.

There’s a common belief that President Herbert Hoover did relatively little to respond to the Depression but that President Franklin D. Roosevelt’s bold action largely cured it. This is untrue.

As a candidate, Roosevelt had campaigned against Hoover’s profligacy, but once elected, he spent even more. His “New Deal” featured huge expenditures on work projects, some of real value but many wasteful. Roosevelt manipulated the currency, adopting contradictory policies. Rather than allowing prices to drop to the point at which the market would clear, he tried to raise prices by curbing business competition. New Deal programs destroyed “surplus” agricultural goods while many around the world were starving.

Far from curing the Depression, the Hoover and Roosevelt policies aggravated it. The stock market crash of 1929 should have triggered only a sharp but short recession. Under federal mismanagement, it initiated the Great Depression. A halting recovery stalled in 1937, and the economy collapsed again. Living standards remained low until economic restrictions were lifted after World War II.

This wasn’t the first time federal politicians had responded to bubble-breakage with bubble-headed ideas. But before the 1930s, their limited constitutional powers curbed their ability to wreak havoc. Beginning in the 1930s, the Supreme Court allowed them to wreak havoc unimpeded.

In 1934, as now, the Supreme Court comprised nine justices. The chief justice was Charles Evans Hughes.

Hughes was one of America’s most respected statesmen. He had served as governor of New York, then as an associate justice on the Supreme Court. He resigned from the court to accept the Republican nomination for president in 1916, losing narrowly to Woodrow Wilson. He served as secretary of state in the Harding–Coolidge administration (1921–25) and then returned to the private practice of law. In 1930, Hoover sent him back to the court as chief justice.

In those days, many Republicans were of the progressive Theodore Roosevelt variety. While governor of New York, Hughes proved himself a progressive. By the 1930s and 1940s, progressives were calling themselves “liberals,” so we shall use both terms.

Commentators frequently divide the other seven justices into two camps. The names they apply to the two camps reflect the liberal bias of the “chattering classes.” They call the three most progressive justices “The Three Musketeers”—a name suggesting a jolly set of fellows. The Three Musketeers were Louis Brandeis (nominated by Wilson), Benjamin Cardozo (by Hoover), and Harlan F. Stone (by Calvin Coolidge). Brandeis and Cardozo were the court’s first Jewish members. All three are much admired among academics.

The remaining four justices were more conservative. Liberal commentators call them the “The Four Horsemen,” a phrase suggesting apocalyptic disaster. One of the four, however, compiled a mixed rather than a purely conservative record. George Sutherland (nominated by Warren G. Harding) had a progressive background, and in 1923, he authored a decision making it difficult to challenge the constitutionality of federal spending programs (pdf). In 1936, he wrote an opinion claiming the federal government could exercise foreign policy powers beyond those authorized by the Constitution (pdf). In 1937, he joined a Cardozo opinion lifting almost all constitutional restraints on federal spending (pdf).

The liberals of the 1930s didn’t display the quasi-totalitarianism that mars the current “progressive” crowd. However, they did believe in a centralized “scientific” government by experts. That belief put them in tension with American constitutional principles of limited government and judicial neutrality.

In 1934, the court decided Home Building & Loan Assn. v. Blaisdell (pdf). In that case, the court weakened (at least temporarily) the Constitution’s ban on state laws impairing “the Obligation of Contracts” (Article I, Section 10, Clause 1). The vote was 5–4.

In his majority opinion, Chief Justice Hughes used the occasion to outline liberal/progressive attitudes toward government and the Constitution. Here is an excerpt:

“There has been a growing appreciation of public needs and of the necessity of finding ground for a rational compromise between individual rights and public welfare. The … pressure of a constantly increasing density of population, the interrelation of the activities of our people and the complexity of our economic interests, have inevitably led to an increased use of the organization of society in order to protect the very bases of individual opportunity. Where, in earlier days, it was thought that only the concerns of individuals or of classes were involved and that those of the state itself were touched only remotely, it has later been found that the fundamental interests of the state are directly affected.

“If by the statement that what the Constitution meant at the time of its adoption it means to-day, it is intended to say that the great clauses of the Constitution must be confined to the interpretation which the framers, with the conditions and outlook of their time, would have placed upon them, the statement carries its own refutation. It was to guard against such a narrow conception that Chief Justice Marshall uttered the memorable warning: ‘We must never forget, that it is a Constitution we are expounding.'”

What Hughes was saying was:

Of course, all those ideas are subject to intelligent challenge.

Later installments in this series explain how the court’s progressives continued to misrepresent Marshall when they dismantled constitutional restraints on federal power. The misrepresentation of Marshall continues among liberal academics even today (pdf).