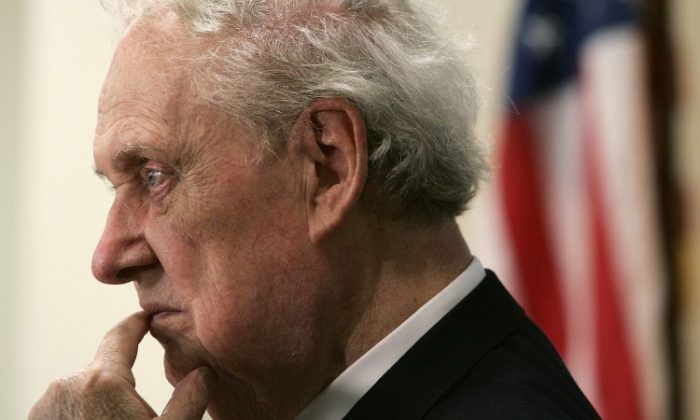 Former Supreme Court nominee Robert Bork, pictured here in 2005, died Dec. 19, 2012, at age 85. He is remembered for his prestigious and influential legal career, but the Yale law professor turned solicitor general turned federal judge is perhaps best known for the one job he missed—Supreme Court justice. (Alex Wong/Getty Images)
US

How the Late Robert Bork Changed the Supreme Court

When Robert Bork died last week at age 85, he was remembered for his prestigious and influential legal career, but the Yale law professor turned solicitor general turned federal judge is perhaps best known for the one job he missed—Supreme Court justice.

When Bork was tapped to replace Justice Lewis Powell on the Supreme Court in 1987, he faced a tougher political environment than Reagan’s previous nominees. The administration was left badly bruised by the Iran-Contra affair, and Republicans had lost control of the U.S. Senate.

To give him wider appeal, Bork was sold as a moderate, and the Reagan administration instructed the Senate Judiciary Committee to make Bork’s judging record the focus of confirmation hearings. Instead, Bork’s long and well-publicized history of remarks criticizing landmark court decisions became the target of Senate interest.

Since the late 1950s, the judicial approval process had been a fairly routine affair, but less than one hour after Bork’s nomination was announced, Sen. Edward “Ted” Kennedy (D-Mass.) gave Bork a stinging introduction that his supporters could not have anticipated.

“Robert Bork’s America is a land in which women would be forced into back-alley abortions, blacks would sit at segregated lunch counters, rogue police could break down citizens’ doors in midnight raids, schoolchildren could not be taught about evolution, writers and artists could be censored at the whim of the government,” said Kennedy in a televised speech on the Senate floor.

It was a damning portrayal, and although related to the cases Bork wrote about, critics have said that Kennedy’s remark was stripped of vital context and detail—revealing more monster than man.

Since his days at Yale, and driven by the originalist theory that informed his legal outlook, Bork would re-evaluate cases of the nation’s top judges for what he considered to be unjustifiable constitutional interpretations. While the cases he criticized also set important precedents for big social developments—civil rights, women’s rights, privacy rights—Bork argued that the nature of these decisions directly interfered in the territory of lawmakers and distorted the scope of judicial power.

Over the course of his review hearing, Bork was given some opportunity to explain his position, but under the shock and specter of Kennedy’s initial comments, much of this nuance was lost.

Without warning, Bork’s nomination marked the beginning of a new era of highly politicized confirmation hearings.

Democrats reasoned that their campaign against Bork was necessary because his regressive ideas had no place in the modern Supreme Court, but Republicans felt that they had been dive-bombed. They repurposed Bork’s naturally emphatic-sounding name to describe the partisan-driven ambush he endured.

Their man had been Borked!

Threats of another “Borking” accompanied subsequent Supreme Court nominees, but the strategy would only work once. Bork himself would prove to be the only victim ever to be Borked.

He may not have done so from the inside, but Bork’s failed hearing significantly changed the justice review process.

As the years have passed, picks for Supreme Court justice have been noticeably shaped by lessons learned from Bork’s nomination. Presidents looking to fill empty spots on the high court bench now are much more likely to choose quieter figures, free from the paper trail of controversial opinions.