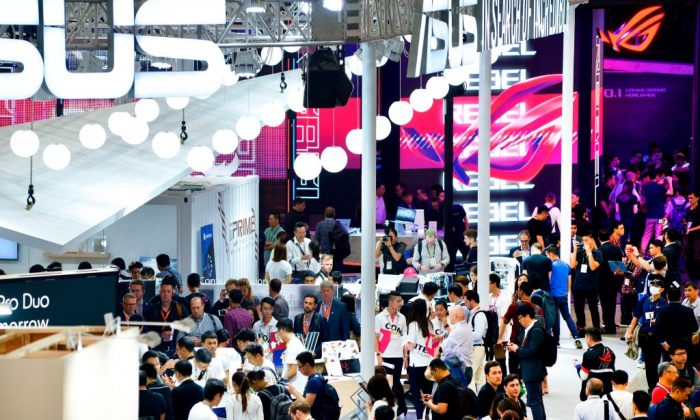 In the early 2000s, China adopted an economic development model based on low-wage manufacturing that has led to the perception of poor-quality goods with the “Made in China” label. In recent years, Beijing is making changes: to bolster the competitiveness of its domestic companies and to catch up with high-tech development in the West.

One area that Beijing is keen on improving is semiconductor manufacturing. Semiconductor chips power nearly all electronic devices, from computers, smartphones, to ballistic missiles.

To fulfill its tech ambition, Beijing has targeted its democratic neighbor Taiwan—one of the world’s leading semiconductor manufacturers—using methods such as corporate theft, talent poaching, forced technology transfer, among others.

According to government data, Taiwan’s semiconductor industry output value was estimated at 2.46 trillion New Taiwan dollars (about $79 billion) as of 2017, which accounted for 20 percent of the island’s total GDP (Gross Domestic Product). That figure places Taiwan third among the world’s semiconductor industries.

The problem of Chinese intellectual property theft from Taiwan had gotten serious enough that the Taiwanese government amended its Trade Secrets Act in February 2013 to include heavier criminal penalties for those found guilty of leaking state secrets to other countries, with a maximum 10-year prison term and a maximum fine of NT$50 million ($1.6 million).

In some instances, Taiwanese authorities were able to prevent the outflow of Taiwanese technology when offenders were apprehended before they could take trade secrets to their new jobs at Chinese companies. But China has used several common tactics to infiltrate Taiwan’s tech sector.

John J. N. Chyi, former legal department executive at Taiwanese computer maker Compal, said the Chinese tech companies often offer tech talent salaries that are three to five times higher than what they earn in Taiwan, in a recent interview with the Taiwan bureau of The Epoch Times.

According to Chyi, Chinese companies specifically target talents who are key researchers at their respective companies, in order to acquire their know-how.

Chyi added that because of these recruitment efforts, there have been several cases of Chinese companies rolling out products onto the market ahead of their Taiwanese competitors. Moreover, these Chinese companies can start generating profit once the products are on the market, while their Taiwanese counterparts might be saddled with costs spent on initial research and development.

Among the four charged was a former Novatek executive surnamed Tseng, who was promised a salary twice that at Novatek, in order to become general manager at Viewtrix, according to Taiwanese radio broadcaster BCC.

In December 2016, U.S. semiconductor company Micron completed its acquisition of Taiwan-based memory chip production company Inotera Memories. In the months prior to the completion of the deal, five Inotera managers left the company and took up jobs at different Chinese semiconductor companies.

The five were charged on violations of the Trade Secrets Act in September 2017, for allegedly taking pictures and making copies of Inotera’s corporate documents prior to leaving the company, some of which were related to how the company’s circuit board-manufacturing cleanrooms were operated.

According to Taiwanese magazine Wealth, the Chinese companies offered the five managers salaries between three to five times what they earned at Inotera.

Beijing has created several recruitment programs to attract overseas Chinese and foreign experts to work in China, for the goal of driving the growth of its tech sector.

One such program, called the Thousand Talents, has recently received scrutiny by U.S. authorities, with several cases of Thousand Talents recruits being charged or convicted for stealing trade secrets from the United States to China.

Liu Shang-jyh, founder of the School of Law at Taiwan’s prestigious National Chiao Tung University, said during a recent school seminar that Beijing has also been using the talents program as a way to obtain Taiwanese technology.

Beijing established Thousand Talents in December 2008. Successful recruits are awarded lucrative employment packages, often with sizable research funding at their disposal, and a leadership or professional position at a Chinese university, research institute, or state-owned enterprise.

The U.S.-China Economic and Security Review Commission (USCC), in a May report on Chinese IP theft, pointed out that the Thousand Talents program has brought more than 4,000 Chinese to return to China by mid-2014.

Chinese tech giant Huawei, whose equipment is being shunned by multiple Western countries due to the security risks that come with the company’s close ties to Beijing, is also a concern in Taiwan.

In May, the U.S. Commerce Department added Huawei and its 68 affiliates to its “Entity List,” which means U.S. firms are banned from doing business with the Chinese tech giant, unless they are granted special government approval.

Also on the banned list is Huawei’s Taiwanese subsidiary Xunwei Tech, which has offices in both Taiwan’s capital of Taipei and a science park in the northern Taiwanese city of Hsinchu.

Beijing has targeted Taiwanese tech companies operating in China, and one of the most well-known cases involves the world’s largest contract manufacturer of electronics and Apple’s assembler, Foxconn.

Taiwanese media widely reported that Chinese automaker and battery maker BYD has poached more than 400 workers from Foxconn since 2003, which then allowed the former to quickly develop a new business portfolio in assembling phones. Both Foxconn and BYD are based in the southern Chinese city of Shenzhen.

In 2006, Foxconn filed a lawsuit against BYD in the Intermediate People’s Court in Shenzhen. It argued that BYD had intentionally obtained trade secrets through its former employees.

After a seven-year legal battle, Foxconn lost. Industrial pundits argued that the court ruling was a huge blow to Foxconn.

“It was far from a fair trial, since the Shenzhen city government, which should have been neutral, clearly took BYD’s side,” an unnamed source familiar with the lawsuit told Japanese media Nikkei in 2015.

In a recent U.S. court case, prosecutors alleged that Chinese and Taiwanese tech companies have colluded to steal trade secrets from the United States.

One of the three Taiwanese, Chen Zhengkun, was a former Micron employee, before joining UMC in 2015. Chen then recruited several Micron employees to steal DRAM-related files and then join him at UMC.

Chen eventually arranged a cooperation agreement between UMC and Jinhua. Under the deal, UMC would transfer DRAM technology to Jinhua to mass-produce DRAM chips. Chen was then named president of Jinhua and place in charge of Jinhua’s DRAM production facility, U.S. prosecutors allege.

In a separate case, Zhang Rujing (Richard Zhang), known as “the father of the Chinese semiconductor,” had founded the China-based Semiconductor Manufacturing International Corporation (SMIC) through recruiting Taiwanese talent, according to media reports.

Zhang, who immigrated to Taiwan from mainland China as a young child, began his career as the general manager of Taiwanese semiconductor company WSMC in 1998.

Two years later, when WSMC was acquired by TSMC, which is currently the world’s largest contract chipmaker, Zhang quit and instead founded SMIC in China.

According to Taiwanese magazine Business Today, Zhang recruited many TSMC employees to join him at SMIC, including a manager surnamed Liu who took with her many of TSMC’s corporate information.

In 2003, TSMC filed a lawsuit against SMIC at a court in California for theft of trade secrets and patent infringement. The two companies eventually settled in 2009. Under the settlement, SMIC agreed to pay TSMC $200 million. Zhang soon resigned from his position as SMIC’s CEO.