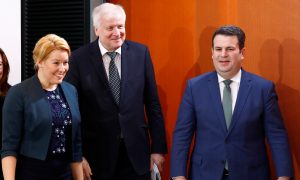 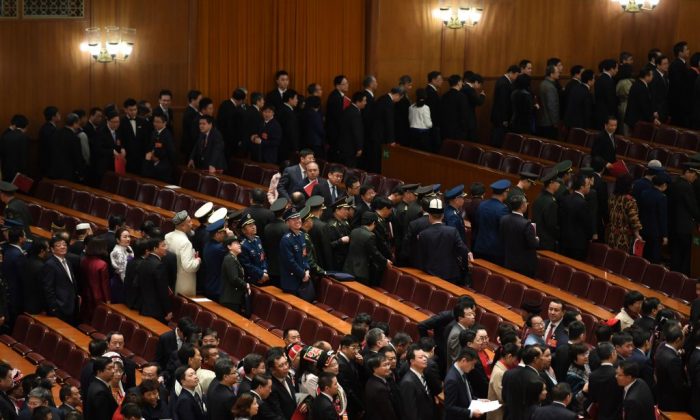 Delegates line up to leave after the closing session of the National People's Congress (NPC) in Beijing's Great Hall of the People when the rubber-stamp parliament approved a foreign investment law on March 15, 2019. (Greg Baker/AFP/Getty Images)
US-China Relations

China is causing billions of dollars in losses for the U.S. economy every year while resorting to a number of different tactics to acquire U.S. technology, according to a recently released congressional report.

At the same time, Beijing hasn’t made efforts to address the technology outflow from the United States, despite recently enacting a foreign investment law.

The report, titled “How Chinese Companies Facilitate Technology Transfer from the United States,” was released by the U.S.-China Economic and Security Review Commission (USCC) on May 6.

It detailed how Beijing has gotten its hands on U.S. technology through six different means: foreign direct investment in the United States; venture capital investment in U.S. companies; joint ventures in China between Chinese and U.S. companies; licensing agreements for U.S. companies operating in China; cyber espionage; and recruitment of U.S. experts to work in China.

The Chinese regime attempted to address intellectual property (IP) theft when it formally enacted a new foreign investment law in March, which will be effective beginning Jan. 1, 2020. The provisions forbid local authorities from compelling foreign companies to transfer their technology; require licensing procedures to be streamlined; and allow foreign investors to transfer money outside of China in any currency, among other measures meant to appease growing U.S. criticism of Chinese trade practices.

But the report’s assessment of the law wasn’t positive. “Although the law requires government officials to protect foreign firms’ IP rights and bans technology transfer requirements, the law only provides general assurances that, if enacted, will still take years to implement.”

U.S. and foreign companies currently “have few options” other than to form a joint venture with Chinese firms in exchange for access to the Chinese market, whereby they must provide their IP and technology to their Chinese partners, the report said. Such arrangements put “U.S. economic competitiveness and—potentially—national security interests at risk.”

Another malpractice by Chinese authorities isn’t destroying information such as product and process information submitted by foreign companies to gain licensing approval, which has led to sensitive corporate information being “shared or exposed.”

“The Foreign Investment Law includes provisions that suggest these [licensing] practices will be eliminated, but the wording of the law remains vague,” the USCC report stated.

This is not the first time the USCC has questioned China’s new foreign investment law. In a trade bulletin released on April 5, the commission pointed out that unnamed observers “have expressed concern the law will serve as window dressing and not result in meaningful change.”

European entities also made similar concerns about the new Chinese law. The European Union Chamber of Commerce, in a press release published on March 15 after the law’s approval, specifically criticized Article 40 in the law.

That provision states that China has the right to retaliate against “any country that takes discriminatory prohibitive, restrictive, or other similar measures against the People’s Republic of China with respect to investment.”

“[Article 40] allows for political issues to influence investor-state relations, and gives China power to take unilateral action against trading and investment partners based on a principle of perceived negative reciprocity,” the press release stated, noting that its vague wording “further adds to the legal uncertainty that the law creates for foreign companies.”

EUobserver, an online newspaper based in Brussels, quoted an unnamed EU official as saying that the new Chinese investment law “does not address all the issues of concern for Europeans,” such as in the area of forced technology transfer, in an article published on April 8. The official added that “it is time for action, not only words.”

The report also noted the uptick in Chinese investment into U.S. semiconductor and artificial intelligence (AI) companies. According to the USCC report, Chinese firms with state funding have attempted to acquire or have invested in at least 27 American semiconductor firms, with investments totaling more than $37 billion, between 2013 and 2016.

Recruiting overseas Chinese and Western experts is another means by which Beijing acquires U.S. technology. The USCC report mentioned two state programs, Project 111 and the Thousand Talents Program, with the former having recruited 39 Nobel Prize winners by 2009, while the latter brought more than 4,000 foreigners to China by mid-2014.

At the same time, Beijing has utilized intergovernmental exchanges and academic partnerships at U.S. universities to gain access to U.S. research and equipment.

For example, the U.S. Department of Energy currently has several bilateral agreements with China, one of them being the U.S.-China Clean Energy Research Center established in November 2009. These exchanges allow Chinese entities to “develop the knowhow to create and run advanced research and development facilities,” the report said.

A 2018 report by the the Australian Strategic Policy Institute, an independent think tank partially funded by Australia’s Department of Defense, also pointed out that, since 2007, Beijing has sent more than 2,500 Chinese military scientists and engineers abroad, often by masking their military ties, to study at colleges and universities in countries like Australia, Canada, New Zealand, the United Kingdom, and the United States.

“These exchanges directly allowed China to develop better military technology by leveraging U.S. and other countries’ experience, facilities, and resources in high-tech industries,” the report concluded.

U.S. technology and IP have also been stolen through cyber attacks, many by hackers with direct ties to Beijing. The USCC report, citing comments from James Lewis, senior vice president at the Center for Strategic and International Studies (CSIS), pointed out that the U.S. economy suffered financial losses of $20 billion to $30 billion annually over the past two decades due to Chinese cyber espionage.