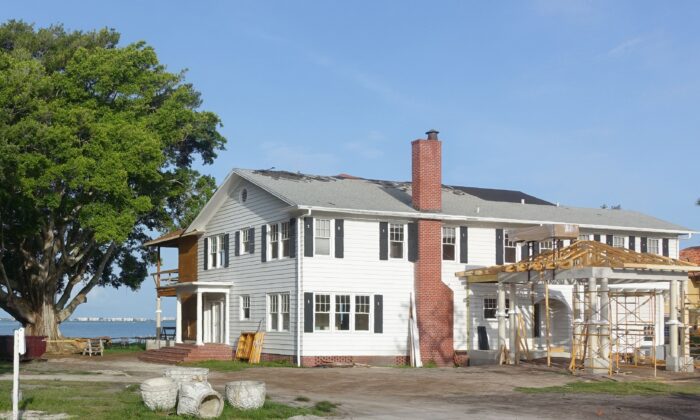 A building and renovation at a coastal home in the Indian Beach neighborhood of Sarasota, Fla., on June 16, 2018. (Kerry Sheridian/AFP via Getty Images)
US Real Estate

Housing Prices Near All Time High of 2006

American mortgages holders saw their collective tappable equity, the amount owners have available to borrow against a home while retaining a stake of at least 20 percent, increased by a record $1.2 trillion in the first quarter of 2022, according to Black Knight’s Mortgage Monitor Report released on June 6.

Mortgage holders have gained a total of $2.8 trillion in tappable equity over the past 12 months, an increase of 34 percent—the equivalent of more than $207,000 in equity available per borrower.

Although rising home prices and interest rates have tightened affordability in the housing market, the same price dynamics have, at least temporarily, managed to increase the housing wealth of existing American mortgage holders significantly.

“In total, American mortgage holders have more than $11 trillion in tappable equity, also a history-making total,” according to Ben Graboske, President of Black Knight.

“It really is a bifurcated landscape—one that grows ever more challenging for those looking to purchase a home but is simultaneously a boon for those who already own and have seen their housing wealth rise substantially over the last couple of years.”

“Depending upon where you stand, this could be the best or worst of all possible markets,” Graboske noted.

With 30-year mortgage rates at 5.25 percent, the share of median income required to make a P&I payment has climbed to 33.7 percent as of May 19, just half a point short of the previous record high of 34.1 percent in July 2006. And it is hurting prospective buyers.

“Factoring in current income levels, housing is now within a whisper of the record low affordability seen at the peak of the market in 2006,” Graboske said.

The annual rate of appreciation slightly dipped in April, with housing prices declining to 19.9 percent year over year from an upwardly revised 20.4 percent for March.

The Mortgage Monitor report explained that record-low for-sale inventories are a key contributing factor to home prices and affordability.

Record high home prices have continued to rise amid a lack of supply, perpetuating the worsening homebuying situation.

Despite an increase of 27,500 in housing stock from March to April, available home listings are 67 percent below pre-pandemic levels.

The figures have 820,000 fewer listings than average at this point during the typical peak homebuying season.

New listing volumes in April were up by by a mere 1 percent for the same month in 2021, 11 percent below the average pre-pandemic levels for the month, as the number of new or pre-existing homes hitting the market tumbled well below standard levels, according to the report.