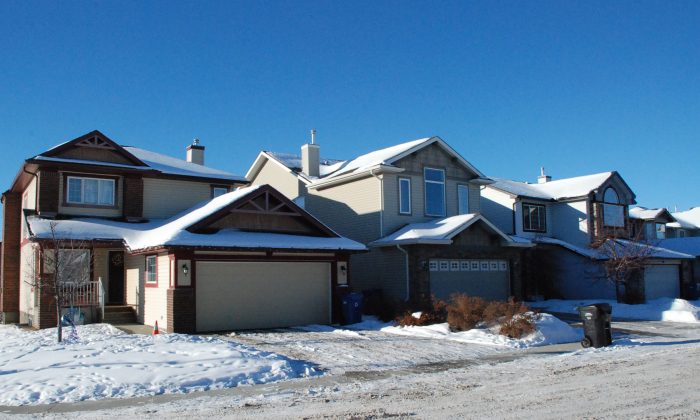 The shock of 2015’s oil price drop hit the economy hard, but the housing market remained resilient. Now in 2016, after the resistance of 2015 has been broken, higher unemployment and inventory are expected to take a greater toll on home prices.

“Housing is lagged,” explains Calgary Real Estate Board (CREB) chief economist Ann-Marie Lurie in an interview with Epoch Times. “We are in this higher unemployment rate for a longer period of time now and there’s no new expected job growth this year.

“That starts to impact the housing market as we move into 2016.”

The CREB, in its 2016 economic outlook and housing market forecast published Jan. 13, expects sales activity to fall 2.2 percent and the benchmark home price to decline 3.44 percent.

The sales decline may not look alarming, but it plummeted 26 percent in 2015 to a “very low level of sales activity for our market. And it is well below long-term averages,” says Lurie.

It will come down to what employment and net migration numbers look like.
— Ann-Marie Lurie, Chief Economist, Calgary Real Estate Board

Calgary’s housing market is going down the dangerous path outlined by the Bank of Canada in its December Financial System Review. The biggest threat to Canada’s financial system is a recession leading to widespread job losses that, in turn, leads to a decline in home prices.

It’s a scenario that observers compare to the 1980s rather than the financial crisis of 2008-09 due to the localized impact. House prices declined 20 percent from 1981-1985. But net migration was negative for five straight years and interest rates were in the high teens.

Multi-family units under construction are at a near record high level and steeper price declines are expected there. Apartment prices are forecast to fall 4.2 percent.

Net migration to Calgary is expected to be lower than what’s been typical. Calgary’s population growth in 2015 is estimated to have been the lowest since 2011 and growth in 2016 will be even lower.

The slower migration will first impact rental properties followed by the ownership market. So newly completed projects will be harder to absorb, according to the report.

“Our prices have been fairly slow to retract and that’s an indication that people haven’t been in that ‘I must sell’ scenario,” says Lurie.

Calgary’s housing market had recovered from the financial crisis by 2013. 2014 was another strong year with 10 percent price appreciation. But it’s in these circumstances of rising prices that highly indebted borrowers are more likely to be seen.

In December, Finance Canada enacted regulation that will require the minimum down payment for insured mortgages to rise to 10 percent from 5 percent for homes priced between $500k and $1 million. This is a measure aimed at cooling off hot housing markets in Toronto and Vancouver, but Lurie expects it to affect Calgary.

She says the challenge is the detached market with homes worth over $600K. “There’s been much more supply than demand already. All these rules will do is just further weaken some of that demand.” In 2015, 4,618 homes sold in Calgary fell into that targeted price bracket.

Ultimately, it is a question of how long. How long will the current climate of weak demand due to elevated unemployment and low energy prices go on? Lurie says would take a few years of the current situation to see significant price declines.

“It will come down to what employment and net migration numbers look like,” says Lurie. It’s a gloomy picture that needs a recovery in the energy sector.