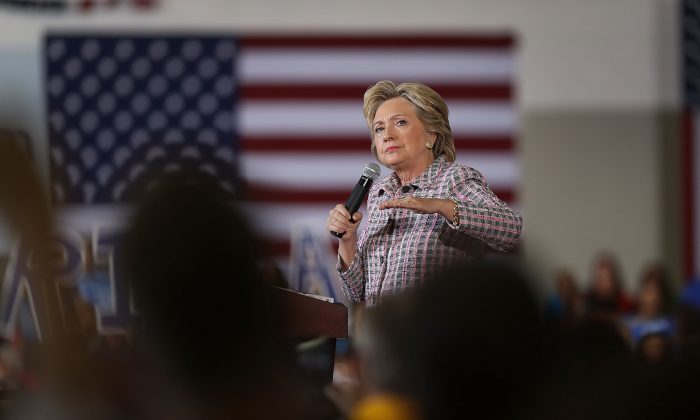 A secret memo by the House Intelligence Committee detailing potential criminal conduct inside the Department of Justice (DOJ) and FBI during the 2016 elections has sent shockwaves through Washington.

Sixty-five members of Congress have called on Chairman of the House Intelligence Committee Devin Nunes to hold a vote to release the memo to the public.

While the contents of the memo remain classified, lawmakers who have seen it have reacted with shock, and have spoken to the disturbing evidence laid out in the memo.

“Our republic is in jeopardy if we allow this type of a palace coup environment to continue to persist,” Congressman Matt Gaetz (R-Fla.) said in an interview with Fox News on Jan. 19 in talking about the memo.

Members of the House have been careful not to divulge any of the classified information contained in the memo, but have given plenty of hints as to the subject matter it deals with.

“Think about what we knew a long time ago, the Clinton campaign paid for the dossier. Think about those text messages of Lisa Page and Peter Strzok, where they talk about … an ‘insurance policy’ to make sure Donald Trump is not elected president,” said Congressman Jim Jordan (R-Ohio) in an interview with Fox News on Jan. 19.

The reference to the “insurance policy” was made in text messages sent between Peter Strzok, the deputy assistant director of the FBI Counterintelligence Division, and Lisa Page, an FBI lawyer assigned to the office of Deputy FBI Director Andrew McCabe, during the 2016 election campaign.

Over 9,500 text messages sent between Strzok and Page were obtained by the DOJ inspector general. The messages showed a clear bias in favor of then-Democratic presidential candidate Hillary Clinton and a general disdain for then-Republican candidate Donald Trump.

Strzok was the lead FBI agent on the agency’s investigation into Clinton’s use of a private email server, as well as the case it had opened against Trump based, in part, on a piece of opposition research. After the elections, Strzok was part of special counsel Robert Mueller’s team, before being fired after the biased text messages were discovered.

In one message between Strzok and Page, they described a meeting they had in the office of McCabe in which they described an “insurance policy” to prevent Trump from getting elected.

The sickening reality has set in. I no longer hold out hope there is an innocent explanation for the information the public has seen. I have long said it is worse than Watergate. It was never Trump and always Hillary.
— Steve King, U.S. congressman, in a tweet

President Trump said in an interview with the Wall Street Journal on Jan. 11 that Strzok had committed treason. In his remarks, Trump made a reference to the “insurance policy.”

Treason is defined under article three in the U.S. Constitution as aiding enemies against the United States or levying war against it. Under U.S. law, treason is punishable by death or imprisonment for a minimum of five years.

Lawmakers who have seen the memo—the contents of which extends beyond the information currently public—have described it as shocking, with one lawmaker invoking the KGB to describe what happened.

“I have read the memo,” Rep. Steve King (R-Iowa) wrote on Twitter. “The sickening reality has set in. I no longer hold out hope there is an innocent explanation for the information the public has seen. I have long said it is worse than Watergate. It was never Trump and always Hillary.”

Congressman Gaetz said after having seen the memo that “heads are going to roll at the FBI and the Department of Justice.”

“There is no way everyone keeps their job … I think that there could be people who face criminal consequences as a result of the activities that are laid out in this memo,” he said.

One topic discussed in the memo is the abuse of FISA warrants to spy on Americans.

National security reporter Sara Carter reported on Jan. 10 that the FBI had used the so-called Trump dossier, in part, to obtain a FISA warrant to spy on the Trump campaign.

However, the dossier was a piece of opposition research paid for by the Clinton campaign and the DNC. The contents of the dossier had been described by former FBI Director James Comey as both “salacious and unverified.”

The memo is expected to shed light on the FISA application and whether those who applied for it knowingly misled the FISA court with false allegations.

Simultaneously, two of then-President Barack Obama’s top aides—National Security Adviser Susan Rice, and U.S. Ambassador to the U.N. Samantha Power—made dozens, if not hundreds, of so-called unmasking requests for the identities of members of Trump’s team in intelligence reports, both before and after the election.