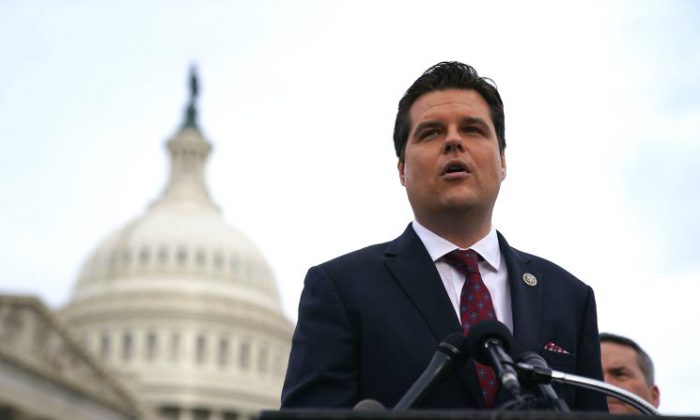 Six members of the House of Representatives urgently called for the public release of a classified memo detailing extensive abuse of government surveillance by public officials. They say its contents undermine the foundations of democracy and will result in the removal of the officials and people going to jail.

“I viewed the classified report from House Intel relating to the FBI, FISA abuses, the infamous Russian dossier, and so-called ‘Russian collusion.’ What I saw is absolutely shocking,” Rep. Mark Meadows (R-N.C.) wrote on Twitter. “This report needs to be released–now. Americans deserve the truth.”

All members of Congress were briefed on the memo after the Intelligence Committee voted Thursday to release it to lawmakers. All of the Democrats on the committee voted against releasing the memo. All of the Republicans voted for the release.

“I have read the memo,” King wrote on Twitter. “The sickening reality has set in. I no longer hold out hope there is an innocent explanation for the information the public has seen. I have long said it is worse than Watergate. It was never Trump and always Hillary.”

The memo is a four-page summary of the House Intelligence Committee’s findings on extensive abuse of the Foreign Intelligence Surveillance Act (FISA). The contents include information on the discredited Fusion GPS dossier which was used in part to apply for a warrant to spy on members of the Trump campaign, according to Sara Carter, an award-winning security journalist.

“Releasing this classified info doesn’t compromise good sources & methods. It reveals the feds’ reliance on bad sources & methods,” Rep. Zeldin wrote on Twitter. “The American public deserves the truth. We should not hide the truth from them. They’ve waited too long. Do not pull the wool over their eyes. Show them the facts. They deserve nothing less.”

The information in the document will lead to the firing of government officials, but it won’t end there, Gaetz told Fox News.

Senior government officials who chose to remain anonymous told Carter that the contents of the memo could also spell an end to Special Counsel Robert Mueller’s investigation into claims that Russia colluded with the Trump campaign to influence the 2016 presidential election.

“It will be tough for a lot of people to see this and especially the media, which has been attempting to deemphasize the dossier,” an anonymous Congress member said. “It’s going to punch a hole in their collusion narrative.”