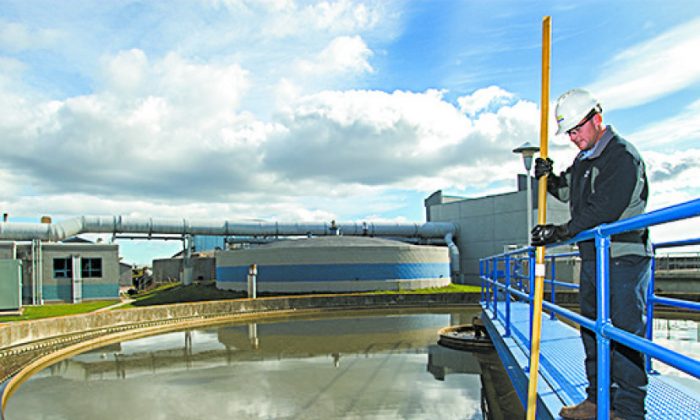 A worker at the Suez Alpena wastewater treatment facility in Alpena, Mich., in this file photo. (COURTESY OF SUEZ)
Environment

The House Committee on Transportation and Infrastructure’s Subcommittee on Water Resources and Environment held a hearing on per- and polyfluorinated alkyl substances (PFAS), or “forever chemicals,” questioning witnesses on the chemicals’ dangers and sparking debate over the proper role of the federal government in managing the country’s waters.

The hearing comes amid heavy media coverage of PFAS regulation, including an Oct. 3 segment on John Oliver’s “Last Week Tonight,” and shortly after California banned PFASs from many consumer goods.

“This is our first hearing in about 10 years on emerging and persistent threats to our water and how these threats affect human health and the health of our communities and our environment,” said Rep. Grace Napolitano (D-Calif.), chair of the subcommittee, in her opening statement.

She went on to claim that the Trump administration had “needlessly weakened” provisions of the Clean Water Act while also politicizing the Environmental Protection Agency (EPA) and otherwise undermining its activities.

Rep. David Rouzer (R-N.C.), the senior Republican on the subcommittee, said he supported efforts to have the EPA prioritize PFAS.

“There’s a lot that we still don’t know—more study, research, and development are needed,” he said.

“With this gap in knowledge, we need to ensure any regulatory actions or requirements are backed by science and done thoughtfully to protect communities and reduce risk. A good, strong manufacturing base that produces products American consumers want I believe can coexist with efforts to improve the environment, if done properly.”

Elizabeth Southerland, retired EPA director of science and technology, told the committee that the United States is “suffering from a reactive system” rather than one that proactively addresses pollution.

“Congress should require the federal government to develop and maintain a priority list of newly identified harmful chemicals for use by federal and state water monitoring programs. Once monitoring data identified where these contaminants pose risk, EPA and the states can control these discharges to the nation’s waters using Clean Water Act authorities,” she said.

Elise Granek, an associate professor of environmental science at Portland State University, testified that “there is ample scientific evidence that these contaminants affect freshwater and marine organisms, with potential implications for human consumers,” adding that policymakers and scientists should address the impact of concurrent exposure to more than one contaminant.

The other witnesses were Chris Kennedy, town manager of Pittsboro, North Carolina; Captain Charles Moore of the Moore Institute for Plastic Pollution Research; Katie Huffling of the Alliance of Nurses for Healthy Environments; and James Pletl, director of water quality with the Hampton Roads Sanitation District, who spoke on behalf of the National Association of Clean Water Agencies.

In response to questioning from Rouzer, Pletl said that an EPA proposal to use a particular method for tracking PFAS chemicals will pose problems, as “its performance has only been established in a single laboratory.”

“It’s extremely important when we start to talk about regulating compounds that the foundation of that whole process, the analytical measurement, we’re sure that the information is reliable, so that permit actions, and the legal liability that comes along with those permit actions, are defensible,” he said.

In response to questioning from Rep. Jared Huffman (D-Calif.), Pletl said he supported eliminating the nonessential use of PFASs in household items.

“I think people forget you have to deal with everything we flush down the drain,” Huffman told Pletl. “I agree that polluters, not ratepayers, should really bear the bulk of the cost of controlling things like PFAS pollution.”

Southerland and Rep. Doug LaMalfa (R-Calif.) debated the extent to which farmers are affected by the Clean Water Act, which is now interpreted more broadly after a U.S. district court decision in August struck down the Trump administration’s Navigable Waters Protection Rule.

“The Clean Water Act already envisioned your concerns,” said Southerland. “They told the agricultural community, ‘You don’t have to apply for any permits on your farm ponds, on your irrigation ditches—you don’t have to worry about gullies or puddles that form during storm water—’”

“Sorry to interrupt—the EPA in concert with the Army Corps of Engineers is doing that very thing in Northern California,” said LaMalfa. “They’re making people get permits to plow their lands to change crops because of some waterways of the United States interpretation that they’re so far getting away with.”