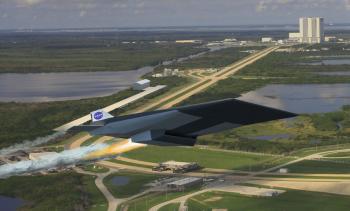 BLAST OFF: An artist's concept shows a potential design for a rail-launched aircraft and spacecraft that could revolutionize the launch business. (NASA/Artist concept)
Tech

Conan Milner
writer
Conan Milner is a health reporter for the Epoch Times. He graduated from Wayne State University with a Bachelor of Fine Arts and is a member of the American Herbalist Guild.
View profile
Follow
biggersmaller
Print
Ways to push existing technologies for a new system of space travel are being examined by engineers at NASA’s Kennedy Space Center. An early proposal suggests using a wedge-shaped aircraft with scramjets that would be horizontally launched from a track.

While the Advanced Space Launch System is still in the preliminary stages, engineers believe that a working system could be created within the next 10 years.

The proposal describes a craft that would launch from a two-mile-long, electrified or gas-powered track, and fly into the upper atmosphere up to a speed of Mach 10. A small capsule would then shoot the vehicle into orbit, similar to a second stage from a conventional rocket. On the return trip, the craft would land on a runway as would an airplane.

Although it sounds like science fiction, engineers say such a system can be accomplished without inventing new technology. According to NASA the Advanced Space Launch System would require several advances in existing technologies, however, but they argue that the work would contribute to various aspects of the nation’s high-tech industry.

The proposal for the system’s rail launcher is not unlike the electric tracks used for rollercoasters. While significant improvements would have to be made in order to make a track that could send a vehicle into space, NASA has already created small-scale tracks at the agency’s Marshall Space Flight Center in Huntsville, Alabama, and at the Kennedy Space Center.

Engineers say that innovations created while building the launching track could also lead to improvements in Earth-bound projects such as commuter rail systems.

In addition to launching tracks, engineers are also looking to scramjets for the new space travel design. Unlike a regular jet engine where fan blades compress the air, in a scramjet, airflow through the whole engine remains supersonic.

Supersonic combustion scramjet technology came to public attention in 2005 when the NASA-built innovation was recognized for setting the speed record for a jet-powered aircraft by Guinness World Records.

But speed isn’t the only reason NASA is eyeing this engine for space travel. Since scramjet engines get their oxygen from the atmosphere, the design allows for more airplane-like operations, which means greater affordability, flexibility, and safety in ultra-high-speed flights for the first stage toward Earth orbit.

Scramjets also make for a lighter vehicle. Once a scramjet-powered craft is accelerated to approximately Mach 4 by a conventional jet engine or booster rocket, it can fly at hypersonic speeds without carrying heavy oxidizer that rockets require.

Engineers say the Advanced Space Launch System is not meant to replace the space shuttle, but may lead to a commercial launch program if a company shows interest in the design.