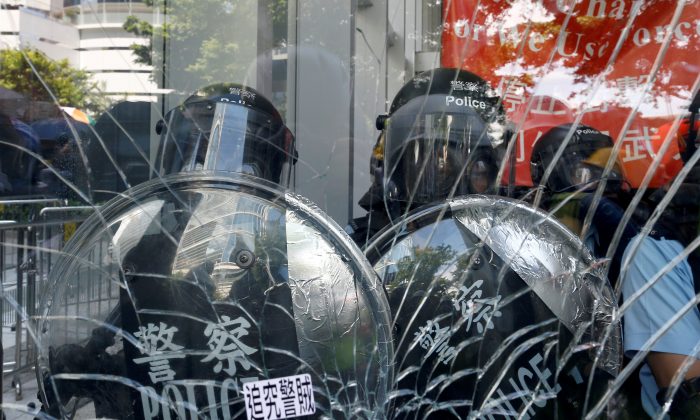 Riot police inside the Legislative Council building where protesters try to break into, during the anniversary of Hong Kong's handover to China in Hong Kong, China July 1, 2019. (Thomas Peter/Reuters)
HK Current Affairs

HONG KONG—As images of demonstrators pounding at the glass walls of Hong Kong’s Legislative Council were beamed live to the world, with the notable exception of mainland China, police inside suddenly withdrew, allowing protesters to break in and vandalize the place.

The tactic mystified former Hong Kong police officers as they watched coverage of hundreds of protesters, mostly students in hard hats and masks, roaming the plush, multistory complex, vandalizing furniture, and daubing graffiti over the walls.

The demonstrators broke computers and spray-painted slogans on chamber walls.

“What were they thinking when they decided to let them into the Legislative Council?” asked Chris Pedder, a retired 22-year veteran of the Hong Kong police who now works as a counter-terrorism and security consultant.

“I can’t think of any tactical reason for doing this. It is just staggering.”

A group of protesters, mostly younger people clad in black, had earlier besieged the building, while an estimated crowd of hundreds of thousands marched largely peacefully against a proposed extradition bill that has plunged the city into turmoil.

The former British colony returned to China in 1997 with an express guarantee of freedoms not enjoyed on the mainland, including the freedom to protest and an independent legal system. Monday was the 22nd anniversary. But locals have complained of Beijing’s growing encroachment in the city’s affairs since 1997.

The violence was not shown on the mainland where Chinese Communist Party censors have blocked news of the Hong Kong protests, wary that any large public rallies could inspire demonstrations closer to home.

TV screens went black on the BBC and CNN when they showed related reports in mainland China. Foreign news channels are only available in luxury hotels and a handful of high-end apartment complexes in China.

Hong Kong leader Carrie Lam, saying she had heard people “loud and clear,” suspended the extradition bill, which would allow people to be sent to mainland China for trial, but stopped short of protesters’ demands to scrap it.

Opponents of the bill fear it would place them at the mercy of a justice system plagued by torture, forced confessions, and arbitrary detentions.

In stark contrast to the peaceful demonstration in nearby streets marking the handover anniversary, protesters surrounding the Legislative Council used metal posts to hammer at the doors and windows and repeatedly rammed steel trolleys into glass panels.

Sections of the reinforced glass splintered, sagged, and eventually gave way and a group of demonstrators burst inside.

“When the protesters entered, the police just suddenly dispersed. Have you ever seen this in any country in any city where an important building, like the Legislative Council building, was attacked and the police were actually present and they didn’t think to stop it to begin with?” Lee told BBC radio.

“No government would tolerate a building being attacked with the police sitting there and doing nothing.”

Hong Kong Police Commissioner Stephen Lo Wai-chung explained at a press conference held at 4 a.m. on Tuesday that his officers inside the building had been under assault for eight hours before they were withdrawn at about 9 p.m.

By that time, about 30,000 protesters were gathered outside, he said.

Lo said some protesters had thrown a toxic powder on some of his officers and others had attempted to interfere with the electrical system. Without lights, it would have been difficult and dangerous for his officers to use normal forceful measures in such a confined space.

“That is why we left to reconsider our plans,” Lo said.

Steve Vickers, a former commander of the Royal Hong Kong Police Criminal Intelligence Bureau who now runs a risk consultancy, said while the police had displayed extraordinary restraint, their tactics were “suspect.”

“Few world governments would have capitulated on such a scale and handed the de facto parliament building to agitators and hard-core demonstrators under such circumstances,” Vickers said. “It must always be remembered that in the unlikely event of the police being perceived as not holding the line, that the only alternative would be direct mainland intervention.”

The police and government issued a series of statements condemning the occupation but it was not until midnight that a convoy of buses pulled up on an approach road to the complex and disgorged hundreds of officers in riot gear.

They took up positions across the road, forming a wall with their riot shields and advanced toward the first barricade about 100 meters east of the Legislative Council, shouting at protesters to move back.

In contrast with clashes last month with demonstrators protesting against the extradition bill, this time the crowds just melted away when police fired a few canisters of tear gas.

There was very little resistance and police did not appear to make any arrests as they pushed the protesters back and cleared the building.

Within an hour, the streets around the complex were empty. All that remained where piles of trash, broken umbrellas, and thousands of plastic ties that the protesters used to bind barricades together.

However, the failure to arrest protesters inside the building means that police will now need to spend months or even years poring over footage of the protest to identify and prosecute suspects, according to current and former officers.