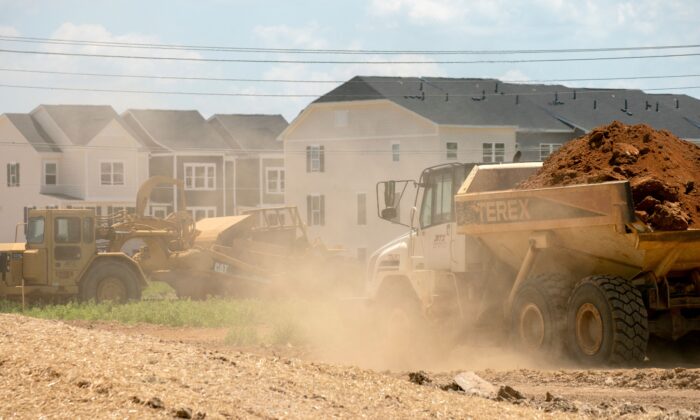 New homes are seen past construction vehicles in Laurel, Maryland, on June 4, 2022. (Stefani Reynolds/AFP via Getty Images)
US Real Estate

Homebuilder pessimism has deepened as confidence in the U.S. housing market continues its downward spiral amid skyrocketing mortgage rates and inflation.

Home construction businesses blame rising rates for the decline in sentiment, by making housing less affordable for first-time buyers at a time when single-family home prices are at an all-time high.

Supply shortages and rising costs for building materials have led also led to the increase in housing prices by increasing construction costs.

Builder sentiment fell for the ninth consecutive month this September, by 3 points to 46, according to the National Association of Home Builders (NAHB)/Wells Fargo Housing Market Index report released on Sept. 19.

This is the lowest level recorded since May 2014, outside of a dip during the pandemic in 2020, and most likely the sign of a housing recession, as any number below 50 is considered negative.

Homebuilders are being forced to lower their prices as the housing market recession shows “no signs of abating” said the NAHB.

The rising cost of land, labor, and building materials initially made builders reluctant to lower prices, but they now have little choice if they are to stay afloat.

Builder sentiment was at a high of 83 points back in January, before the Federal Reserve increased interest rates, making borrowing more expensive.

“Buyer traffic is weak in many markets as more consumers remain on the sidelines due to high mortgage rates and home prices that are putting a new home purchase out of financial reach for many households,” said NAHB Chairman Jerry Konter.

The average 30-year fixed rate rose from around 3 percent and then began rising steadily, hitting 6 percent for a while back in June.

“Builder sentiment has declined every month in 2022, and the housing recession shows no signs of abating as builders continue to grapple with elevated construction costs and an aggressive monetary policy from the Federal Reserve that helped pushed mortgage rates above 6% last week, the highest level since 2008,” said NAHB Chief Economist Robert Dietz.

The Fed is expected to raise interest rates again this week to combat high inflation at its next policy meeting on Sept. 20–21.

The central bank is expected to raise its policy rate by 75 basis points for the third time since June.

The Fed has lifted benchmark rates from near zero to its current range of 2.25 to 2.50 percent since it started its hike back in March.

“In this soft market, more than half of the builders in our survey reported using incentives to bolster sales, including mortgage rate buydowns, free amenities and price reductions.”

The NAHB index calculates three components to come up with its final assessment.

Current sales conditions for September tumbled to 54 points, while sales expectations for the next six months fell to 46.

The Commerce Department is expected to release a report showing that housing starts had changed little in August.

A rise in rental prices has led to a boom in the construction of new multi-family apartments, which is offsetting losses from single-family home construction, said Reuters.

“Expect housing data to continue to show weakness—this is by design,” said Odeta Kushi, Deputy Chief Economist at First American in a tweet. “The Fed intends to slow housing, which usually has big multiplier effect throughout the economy. It’s working.”