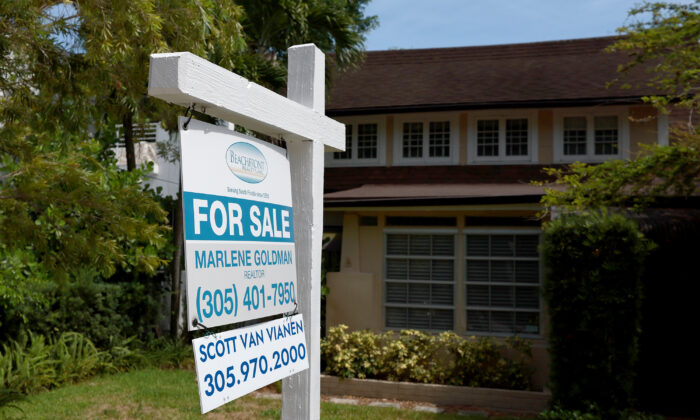 Existing U.S. home sales have dropped 5.9 percent in July, the sixth consecutive month of decline, according to the National Association of Realtors (NAR), which admitted a “housing recession.”

At a seasonally adjusted annual rate of 4.81 million, home sales are down 25.9 percent since January and 20.2 percent from a year ago.

The average mortgage rate has gone down slightly since its peak two months ago.

The NAR said that the inventory of unsold existing homes rose to 1.31 million at end of last month, or the equivalent of 3.3 months at the current monthly sales pace.

The available properties have remained on the market for 14 days, tying June’s record low, but was down from 17 days from last July, as more buyers pulled out of the market, allowing for a recovery in inventory.

Still, at least 82 percent of homes sold in July 2022 were on the market for less than a month.

The slight drop in prices has done little to increase housing sales at a time of higher mortgage and borrowing rates.

“With median prices rising a record 125 consecutive months of year-over-year increases, the decline in mortgage rates from over 6 percent in June to 5.48 percent today will not do much to spur sales,” said Mike Shedlock, of MishTalk, a global economics blog.

Shedlock believes that the Federal Reserve’s previous easy monetary policy and extremely low rates set during the pandemic led to a massive panic buy and grossly inflated the buyers’ market.

Now, that central bank policy is leading the housing market toward a crash.

Since March, the Fed has raised interest rates to their highest level in decades in response to skyrocketing inflation, causing mortgage rates to jump over from where they were when the market was “hot.”

Shedlock noted that the Fed also failed to see the rise in housing prices as part of inflation.

He said that the housing market will not return to normal until prices crash or mortgage rates come down, or both, pointing out that although the Housing Affordability Index has fallen to its lowest rate since 1989, home prices are still too much inflated.

However, Yun is still optimistic about the homes sales market, which he believes will soon stabilize, “since mortgage rates have fallen to near 5 percent, thereby giving an additional boost of purchasing power to homebuyers.”

“We’re witnessing a housing recession in terms of declining home sales and home building,” Yun added, but he does not think there will be a recession in home prices, as inventory remains tight and prices continue to rise, with nearly 40 percent of homes still commanding the full list price.

Much of this news comes after a report this month by Fitch Ratings which declared that the likelihood of a severe downturn in the U.S. housing market has risen by 15 percent.

“When is the last time existing home sales collapsed 25.9 percent in six months with the economy not in recession?” observed Shedlock, who predicts very weak growth in the housing market for years to come as the Fed struggles with inflation and a global economic crisis of which he believes is of its own making.