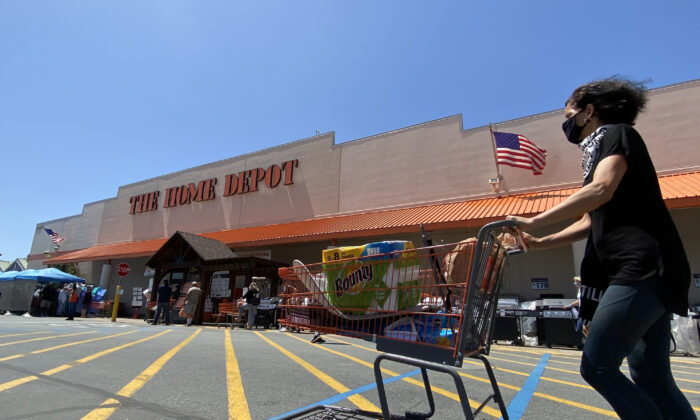 A shopper wearing a mask pushes her cart outside a Home Depot in Marina Del Rey, Calif., on May 22, 2020. (Chris Delmas/AFP/Getty Images)
Economy

“The investments we have made across the business have significantly increased our agility, allowing us to respond quickly to changes while continuing to promote a safe operating environment,” Home Depot CEO Craig Menear said in a statement. “This enhanced our team’s ability to work cross-functionally to better serve our customers and deliver record-breaking sales in the quarter.”

After plummeting by around 38 percent between mid-February and mid-March, when widescale lockdowns threw much of the U.S. economy into a tailspin, shares of Home Depot have made a resounding comeback off the March lows, up 32 percent year-to-date.

Diluted earnings per share of Home Depot stock increased 26.8 percent from the same period in the prior year, with the company announcing a second-quarter cash dividend of $1.50 per share, making it the 134th consecutive quarter it has paid a cash dividend. Analysts expected earnings of $3.71 per share, with Home Depot beating predictions with a reported $4.02 per share, at a net quarterly revenue of $4.3 billion.

The Atlanta-based company said that in the second quarter, it invested around $480 million in additional benefits for employees, while year-to-date, Home Depot has spent around $1.3 billion on enhanced pay and benefits in response to COVID-19. The company employs over 400,000 people, with 2,293 retail stores in all 50 states, Canada, and Mexico.

“We remain focused on continuing the momentum of our One Home Depot investment strategy that we believe will position us for continued growth over the long term, while at the same time maintaining flexibility to navigate the demands of the current environment. Through it all, we will continue to lead with our values by doing the right thing and taking care of our people,” Menear added.

The spending habits of Americans have shifted as they spent more time at home during the COVID-19 crisis while consumption opportunities narrowed. With things like gyms and restaurants closed due to lockdowns, online commerce was a major beneficiary.

Walmart said in its quarterly earnings report that its U.S. e-commerce revenue surged 97 percent from a year ago, while total second-quarter revenue was $137.7 billion, up $7.4 billion compared to the same quarter last year, an increase of 5.6 percent.

The company’s international sales saw a 6.8 percent decline in the second quarter relative to the same period last year, however. Walmart employs over 2.2 million associates worldwide.