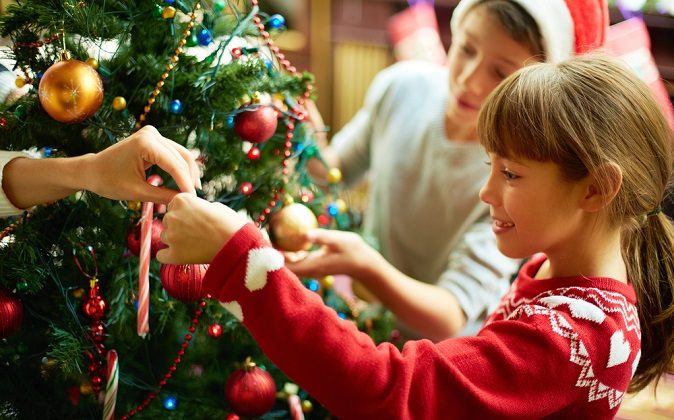 Every family develops its own holiday traditions. Some are homespun twists on common practices others are just plain odd. A few days ago, a Reddit Mod asked what were some of the most unique traditions out there. Here are a selection of some strange answers.

1. Has to be an orange smashing contest at Christmas eve dinner. Not the chocolate oranges like normal people, but real oranges. Everyone at the table gets one, and gets one hit to do as much damage as they can. My grandma is the judge, and the winner gets to open their present first the next morning.

2. While I was growing up, my dad and I would hide a potato wedge somewhere on the Christmas tree every year to see how long it would take for my mother to notice. Our record was like 9 days.

My mum and dad turn their bedroom into Narnia. You open their door to be met with fur coats and a load of fake snow chucked at you by one of my cousins. An over-worked smoke machine has filled the room with it’s magical mist, so the only thing you can see is a half-sized street lamp glowing in the corner. As the smoke clears you see Mr Tumnus (my dad) who greats you with some (recorded) flute music. After this, the white witch (my mum) invites you onto her sleigh (her bed), and offers you some Turkish delights. That’s when things get really weird. When all of the siblings are on the bed, the sleigh-ride begins (they’ve set up a projector which shows a first person view of a mountain ride), while they and my cousins (who are dressed as animals) run up and down the sides of the bed throwing fake snow at you and holding bits of tree to make it look, in my mothers words, “more realistic.” Then we all get drunk and open our presents.

4. Even though my siblings and I are all moved out of the house, when we get to my mother’s house on Christmas Day, she makes us wait at the top of the stairs so she can get a picture of us running downstairs to our pile of presents under the tree. We are all in our twenties.

5. I always thought it was weird. Don’t know if it actually is, but as kids, we always bickered on about who got to open presents first, so my mom had this pickle ornament and would hide it anywhere, and whoever found it first would open first.

Sometimes it would be on the tree, and sometimes not. It was always random and fun. We still do it when the family is home for the holidays just because it’s something we’ve always done, even though we’re all beyond the age to care who goes first.

6. I love this tradition but most people find it really strange. On Christmas morning we aren’t allowed to open all our presents but rather we get one present every hour. It’s brilliant.

The anticipation lasts all day and you get to really enjoy each present . It’s also scary because as a kid you knew you were bound to whatever gift you picked for an hour so it was often a heart wrenching decision!

7. Every year, my mother goes out and buys about 100 walnuts (whole with the shell and everything). She will go in with a sharp knife and cut the walnut open in half and remove the nuts from the inside. Then she will fill the insides back up with either pennies, nickels, dimes, quarters, $1, $5, a few $10’s, $20’s and maybe like 1 $50 bill.

Sometimes, she would just leave the nuts inside and wouldn’t put in any money at all. She will then take a hot glue gun and stick the two halves back together. Lastly she would glue a looped string to the top and paint the walnut silver.

She would hang all of them up on the Christmas tree and on Christmas eve, my dad and I would take turns picking them off the tree. We would then take a knife and carefully open them up one by one. My dad and I would take turns every year winning more money. However, one year, my dad starting talking all this **. He got every big bill and I think I had something like $6. My mom got so pissed at me that she slipped me a walnut with a $100 bill in it.

8. It’s not really special but we try to disguise our presents in different size boxes, and try to make it as ridiculous and hilarious to open as is possible.

My favorite example was 2 years ago when my brother’s present to me was (at first) a box that was roughly the size of a printer. Then it had several boxes within the box (all boxes were wrapped of course). Then in the very last box was a deodorant stick. Then I had to unscrew the deodorant all the way until it popped out, and underneath that was a plastic bag that contained a gift card.

Yeah, we waste a lot of wrapping paper, but it’s hilarious seeing all of us getting frustrated trying to figure out what the present is.

9. I have a family member who gifts random stuff every year. Last Christmas I received perfume. I am a man. Maybe they are trying to tell me something.

10. For about 5 years, my brother has called me Dave, even though that isn’t my name. It caught on in the family and now Christmas is the time when everyone calls me Dave when they come to visit.

11. My uncle received a prepackaged and extremely unappetizing fruitcake as a Christmas present when he was about seventeen. As a joke, he wrapped it up and gave it to my grandmother (his mother) on Christmas day.

The next year, my uncle opened his final Christmas present from my grandmother. It was the fruitcake, still uneaten and still unwrapped. A legacy began. Every Christmas, the current bearer of the fruitcake gave it to the other in increasingly ludicrous ways.

One year, my grandmother asked my uncle to pour the orange juice on Christmas morning. Inside the carton was: the fruitcake.

Another year an anonymous gift of gourmet jello arrived at my uncle’s door. Suspended within was the fruitcake.

The next year, my uncle baked the fruitcake into a loaf of bread. While my grandmother was cutting the bread, she cut the end off of the fruitcake. She nailed it back on with a roofing nail.

Often, third parties are coerced into assisting with the delivery. When my mother married my father, her initiation process as the new daughter- in-law was to present my grandmother on Christmas with the fruitcake.

My grandmother retired from the school board one Christmas, and her confused supervisor’s parting gift to her was the fruitcake.

The fruitcake arrives in decorative wreaths. It is found in a daughter’s doll house. It is lowered from the ceiling with twine during Christmas dinner.

The fruitcake is 36 years old this Christmas. We have yet to unwrap it.

12. We all have to hear the lamest joke my dad has heard in the past year, before we can open presents.