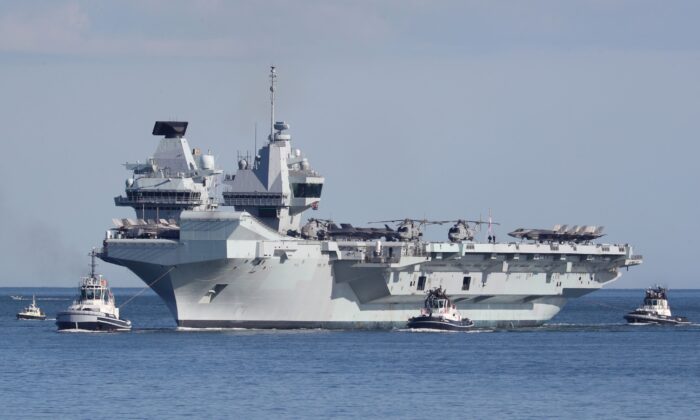 The Royal Navy’s flagship, HMS Queen Elizabeth pictured before returning to the Portsmouth in the UK on Dec. 9, 2021. (Andrew Matthews/PA)
UK

HMS Queen Elizabeth is heading across the Atlantic Ocean to replace her sister ship, HMS Prince of Wales, in joint manouevres with the U.S. Navy, U.S. Marines, and the Royal Canadian Navy.

The Prince of Wales had been due to take part in the Westlant 22 exercises but suffered a “mechanical failure,” which turned out to be a broken starboard propeller shaft, after it left its home port of Portsmouth late last month.

The crew of the HMS Queen Elizabeth were told last week they would be redeployed because their sister ship was out of action.

The giant carrier, accompanied by the frigate HMS Richmond, will stop in Halifax, Nova Scotia, before taking part in flight trials with F-35B Lightning jets. It is also due to visit the Caribbean.

But the Royal Navy has confirmed the Atlantic Future Forum—an Anglo-American defence conference—will be hosted on board the carrier, in New York, at the end of the month.

HMS Queen Elizabeth will then cross the Atlantic again to take part in NATO exercises in the Baltic, the Mediterranean, and possibly the sensitive Black Sea region.

A Royal Navy spokesman said: “The operations are part of galvanised NATO efforts in the face of Russia’s unprovoked invasion of Ukraine to safeguard security, stability, and prosperity across Europe.”

HMS Prince of Wales spent less than 90 days at sea in its first two years after being plagued by leaks, which flooded the engine room and damaged electrical systems.

“Our initial assessment has shown that coupling that joins the final two sections of the shaft has failed. Now, this is an extremely unusual fault and we continue to pursue all repair options,” he said.

HMS Ark Royal was decommissioned in 2011 and HMS Illustrious followed in 2014, three years before HMS Queen Elizabeth came into service.