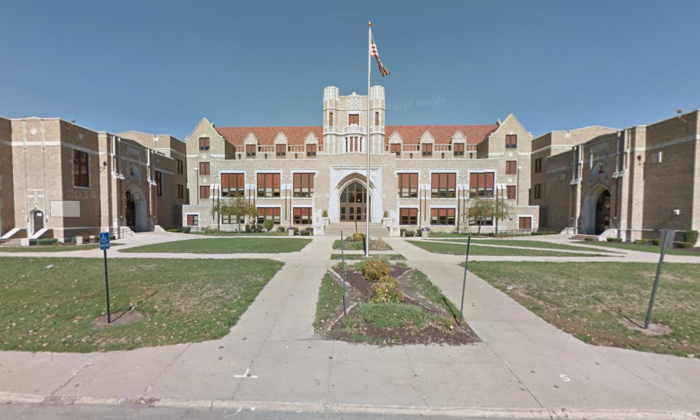 A school resource officer’s quick response helped prevent a possible mass shooting after he confronted a lone gunman at an Illinois high school on Wednesday, May 16, officials said.

The white male suspect—later identified as Matthew Milby, a former student at the school—had fired multiple shots near the west gymnasium of Dixon High school during the morning hours.

Police said that at this point the 19-year-old was confronted “head on” by the school resource officer. During the encounter, the suspect fled from the school and began running westbound on Armory Drive.

During the pursuit, Officer Mark Dallas was shot at several times by the suspect, but was not hit. Dallas returned fire and wounded the suspect with non-life threating injuries. The shooter was taken into custody and is currently receiving medical attention.

The suspect is under 24-hour surveillance, police added.

“I could not be more proud of the police officer and the way he responded to the situation. With shots ringing out through the hallways of the school, he charged towards the suspect and confronted him head-on,” Chief of Dixon Police, Steve Howell said. “Because of his heroic actions, countless lives were saved. We are forever indebted to him for his service and his bravery.”

Officer Dallas is had been assigned as the Dixon High School Resource Officer for the past 5 years. Due to his quick response, there were no injuries to any staff, students, or community members. The Dixon Police Department also said there was no “further threat.”

The story of the officer’s heroic actions garnered praise from many, including Vice President Mike Pence.

“Another example of the brave work performed by law enforcement each and every day,” Pence wrote on Twitter, Wednesday. “Lives were saved thanks to the heroic actions of school resource officer Mark Dallas.”

Another example of the brave work performed by law enforcement each and every day. Lives were saved thanks to the heroic actions of school resource officer Mark Dallas. #PoliceWeek https://t.co/RNPuJTX6sF

“Today, we should all be very thankful to school resource officer Mark Dallas for his bravery and quick action to immediately diffuse a dangerous situation at Dixon High School,” Rauner wrote on Twitter.

Today, we should all be very thankful to school resource officer Mark Dallas for his bravery and quick action to immediately diffuse a dangerous situation at Dixon High School.

Officer Dallas will be placed on paid administrative leave per policy. An investigation into the incident is also ongoing.

The incident comes after the New York State Sheriffs’ Association said that they wanted an armed officer in every school in New York.

The association is calling upon the State to include funding in the 2018 budget to provide enough for at least one armed school resource officer at every grade school and high school.

“This will be an expensive undertaking,” Wayne County Sheriff Barry Virts, President of the New York State Sheriffs’ Association, said in a statement, “but we owe it to our children, and their parents, to provide a safe place for education to take place.”