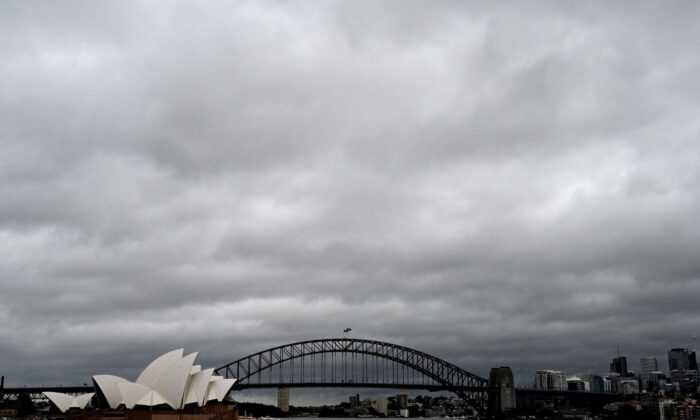 Huge swells have lashed Sydney, swallowing beaches under tide waters and ripping boats from their moorings inside the harbour.

Bondi and Clovelly beaches were flooded over and waves battered the walls of the beachside Coogee Surf Club on Saturday morning.

Inside the harbour near the Manly ferry wharf, boats had been ripped from their moorings, with some vessels washed up on the nearby beach.

A sailing vessel was spotted capsized at Bronte beach with emergency services launching a search for potentially missing crew.

But the search was cancelled after the boat’s owner came forward to say it had been ripped from its dock south at Gordons Bay due to the heavy seas.

The Bureau of Meteorology has a hazardous surf warning in place for the New South Wales (NSW) coast as winds calmed in Sydney after a night of huge gusts, including one at 74 kilometres per hour inside Sydney Harbour.

Across NSW, State Emergency Service crews performed six flood rescues in the 24 hours up to 5 a.m. Saturday, with the agency also receiving 468 calls for help over that period.

Elsewhere in the state, flood victims were picking up the pieces for the second time in little over a month.

Byron Shire’s deputy mayor says locals had little warning about the damaging conditions that flooded the region for the second time in a month earlier this week.

Sarah Ndiayae has praised the support offered so far by the state and federal governments but says the poor preparation was the result of Canberra’s cuts to publicly funded agencies like the CSIRO and Bureau of Meteorology.

“They [the Bureau] removed the flood warning from Mullumbimby and said that the weather had cleared so a lot of our community were caught out,” Cr Ndiayae said.

“That was really a shock to people. It was really hard to take after everything we’ve gone through and there’s been so many conversations about where the system failed us in the first place.”

She said the community was both exhausted by the double floods and buoyed by the cooperative spirit between people.

The Mullumbimby high school teacher said the area desperately needed short-term to long-term housing fixes as the Easter holidays approached and flood refugees would be forced out of short-term stays.

Her school would remain open but there were others across the region that would be forced to shut, adding even more disruption to the lives of young students who had already endured two years of COVID-19.

“I’m really worried about my community and how we’re going to fare over the next little while,” Cr Ndiayae said.

Windy weather and high tides are forecast for NSW over the first weekend of April after record rainfall last month, but conditions are expected to ease as the weather system moves south.