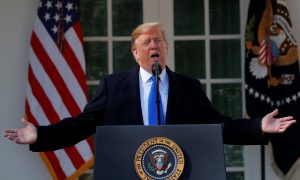 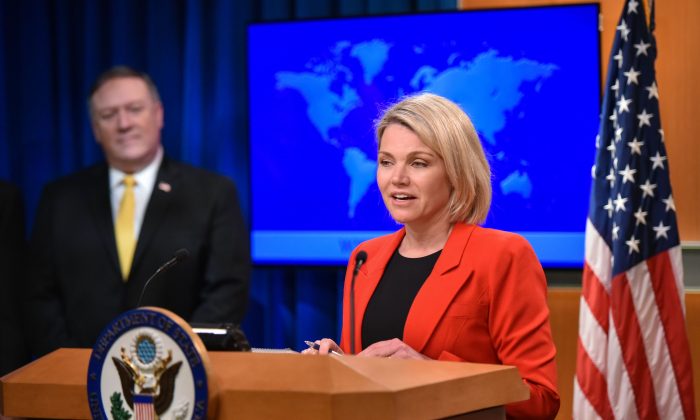 State Department spokesperson Heather Nauert introduces Secretary of State Mike Pompeo during the release of the 2017 Annual Report on International Religious Freedom on May 29, 2018, at the US Department of State in Washington. (Mandel Ngan/AFP/Getty Images)
Trump Administration

State Department spokeswoman Heather Nauert withdrew her name from consideration to become the next U.S. ambassador to the United Nations, saying she made the decision after mulling over the best interests of her family.

In a statement released Feb. 16, she said she was thankful for the Trump administration’s faith in her. The State Department noted that President Donald Trump will make an announcement with respect to a nominee for the position soon.

“I am grateful to President Trump and Secretary Pompeo for the trust they placed in me for considering me for the position of U.S. Ambassador to the United Nations,” she said. “However, the past two months have been grueling for my family and therefore it is in the best interest of my family that I withdraw my name from consideration.”

The State Department release didn’t specify whether Nauert would continue serving as a spokeswoman. A State Department spokesman told The Epoch Times that they had no further announcements regarding personnel changes and instead referred back to the original statement.

In the same release, Secretary of State Mike Pompeo added that he respects Nauert’s decision to withdraw, and said she has performed her duties as spokesperson with “unequaled excellence.” Nauert has been serving in the department for the past two years in different roles.

“Her personal decision today to withdraw her name from consideration to become the nominee for United States Ambassador to the United Nations is a decision for which I have great respect,” he said. “I wish Heather nothing but the best in all of her future endeavors and know that she will continue to be a great representative of this nation in whatever role she finds herself.”

In December, when he first nominated her for the U.N. position, Trump described Nauert as “very talented, very smart, very quick, and I think she’s going to be respected by all.”

Nauert was a breaking news anchor on “Fox & Friends” when she was tapped to be the face and voice of the Trump administration’s foreign policy two years ago. With a master’s degree from Columbia University’s Graduate School of Journalism, she had moved to Fox from ABC News, where she was a general assignment reporter.

She moved up in the State Department’s hierarchy when Secretary of State Rex Tillerson was fired in March of last year and replaced with Pompeo. At that time, Nauert was appointed acting undersecretary of state for public diplomacy and public affairs. She was, for some time, the highest-ranking woman and fourth-highest-ranking official in the building, according to the Associated Press.

In that role, Nauert oversaw public diplomacy in Washington and all of the roughly 275 overseas U.S. embassies, consulates, and other posts. She was in charge of the Global Engagement Center that fights extremist messaging from the ISIS terrorist group and other terrorist groups, and has a seat on the U.S. Agency for Global Media, which oversees government broadcast networks such as Voice of America.