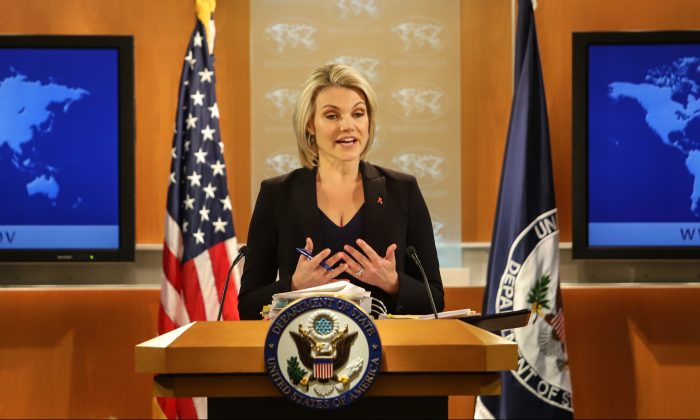 The State Department says Heather Nauert, who was picked by President Donald Trump as a nominee to be the next U.S. ambassador to the United Nations, has withdrawn.

Nauert, currently spokeswoman for the Department of State, said that “the past two months have been grueling for my family and therefore it is in the best interest of my family that I withdraw my name from consideration.”

Nauert was a breaking news anchor on Trump’s favorite television show, “Fox & Friends,” when she was tapped to be the face and voice of the administration’s foreign policy two years ago. With a master’s degree from Columbia University’s Graduate School of Journalism, she had moved to Fox from ABC News, where she was a general assignment reporter.

Nauert catapulted into the upper echelons of theState Department’s hierarchy when Secretary of State Rex Tillerson was fired in March and replaced with Mike Pompeo. Nauert was then appointed acting undersecretary of state for public diplomacy and public affairs and was for a time the highest-ranking woman and fourth highest-ranking official in the building.

That role gave her responsibilities beyond the news conferences she held in the State Department briefing room. She oversaw public diplomacy in Washington and all of the roughly 275 overseas U.S. embassies, consulates, and other posts. She was in charge of the Global Engagement Center that fights extremist messaging from the ISIS and other terrorist groups, and she has a seat on the U.S. Agency for Global Media that oversees government broadcast networks such as Voice of America.

“I am grateful to President Trump and Secretary Pompeo for the trust they placed in me for considering me for the position of U.S. ambassador to the United Nations,” Nauert had said.

President Donald Trump offer Nauert his nomination to be the next U.S. ambassador to the United Nations on Dec. 7.

“She’s very talented, very smart, very quick, and I think she’s going to be respected by all,” Trump said at the time.

Nikki Haley, who announced her resignation in early October, said she’d stay on until the end of the year to give the White House time to choose her successor.

Haley—46, a mother of two, and the daughter of Indian immigrants—said that the post had been the honor of a lifetime.

Asked if she was resigning because of her family or for other reasons, Haley said she was a believer in term limits and felt like she needed to make way for someone else.

“I was a governor for six years, and we dealt with a hurricane, a thousand-year flood, a church shooting, a school shooting. There was a lot. And then, to come in and do two years of Russia and Iran and North Korea—it’s been eight years of intense time, and I’m a believer in term limits,” she said. “I think you have to be selfless enough to know when you step aside and allow someone else to do the job.”

“I am such a lucky girl to have been able to lead the state that raised me and to serve a country I love so very much. It has really been a blessing, and I want to thank you for that,” Haley told Trump.

On Nauert’s announcement, Secretary of State Mike Pompeo said he respected her decision and that Nauert had performed her duties as a senior member of his team “with unequalled excellence.”

The State Department said Trump would announce a nominee for the position “soon.”