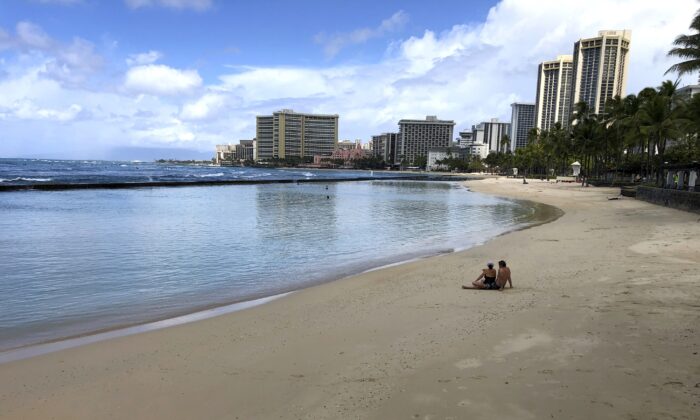 A couple sits on an empty section of Waikiki Beach in Honolulu on March 28, 2020. (Caleb Jones/AP Photo)
Viewpoints

Hawaii Is Depopulating: A Crisis on America’s West Flank

I’ve done a series of articles on Puerto Rico, the Bahamas, and Panama. Puerto Rico is an American territory and is in grave distress. The Bahamas, right off Miami, is broke and impoverished and is being overrun with China’s Belt and Road operations. It doesn’t even have a U.S. ambassador. Panama is doing well and does business with China because the Americans have disappeared. China and Russia are now announcing overt, joint military exercises in the Caribbean.

Meanwhile, the Biden administration is ignoring the Monroe Doctrine and is obsessed with establishing abortion enclaves on federal facilities and ensuring that men can compete against little girls in skateboarding contests.

Now, for the good news. Our western flank is in trouble also. Hawaii is in open societal crisis, and the media is ignoring the opening phases of the collapse of society in that state. I have several Hawaiian relatives and close friends in Hawaii, and the situation is distressing, but the topic is locked behind an iron curtain of callous lack of media interest.

I’ve traveled to Hawaii routinely for official duties and for family visits. The first thing I noticed in 2008 was the aging condition of Honolulu Daniel K. Inouye International Airport. On my first visit in 1983, the terminal was a stunning architectural facility—modern, efficient, and embracing symbols of Hawaiian heritage. On my later visits, the facility was aging and worn, with faint traces of its former brilliance.

Worn infrastructure is an immediate sign of bloated and inefficient local governance. Another indicator is a declining population and a population exodus. Hawaii is the third-fastest depopulating state in the union. This is dangerous and destabilizing. Mainlanders still have images of a beautiful, growing populace with Elvis surfing on Waikiki Beach, but that’s ancient history and a gross illusion foisted upon them by powerful tourism interests. Long-term residents with actual Hawaiian heritage are departing. They can’t afford the cost of living and the lack of jobs.

In addition to the power of the tourist industry is the relatively large Department of Defense (DoD) presence, which is still expansive and influential. But the jobs are either uniformed military, civil service, or contractors who are often highly trained and technical. There isn’t broad, ready access to these positions for the citizens of Hawaii.

Hawaii is the critical location for command, control, and logistically support of the large deterrence effort against China across the vast Pacific, including support of Taiwan. The DoD facilities in Hawaii are in woeful shape. Pearl Harbor’s last drydock was built in World War II and is a critical facility for regenerating Navy ships in case of conflict. Missile defense is lagging, the Red Hill fuel storage facility is a mess, and war reserve stocks of munitions are being depleted to support the conflict in Ukraine.

The DoD presence along with the tourism interests camouflage the real state of affairs in Hawaii, but there’s a third part to this accelerating disaster in Hawaii. It’s the blue monopoly that has established crushing control in the Aloha State.

The bloated and stifling state and local governments have become the killer of economic growth in Hawaii. Starting or operating a small or medium-sized business in Hawaii is like trying to be a new, flourishing construction company in New York. It’s an overwhelming obstacle course to navigate.

The Democrats are dominant in Hawaii. And this dominance continues despite allegations of corruption. How can this be? Well, I would suggest, like many Americans learned in 2020, we assumed that someone else was taking care of the election process. Americans were right: Somebody else was taking care of the process, and in at least 30-plus counties in America, it wasn’t personalities with the public interest in mind.

Hawaiians need to assertively volunteer and swarm election offices to become election officials so that there’s more equivalency behind the counter in the process to bring transparency and integrity to Hawaiian elections.

The accelerating decline of Hawaii should be highly visible in the American news cycle. There are combined forces that appear to be happy to drive Hawaii into the ground, or below the water line in the Pacific.

America Firsters should unite with Hawaii Firsters to make Hawaii great again as both an American state and a reborn Hawaiian republic. My wife has educated me over the years on the history of the less-than-ethical absorption of Hawaii into the union. Right now, we need to save Hawaii from total collapse. We need to save Hawaii as a state of the union and rapidly recognize a rebirth of Hawaiian heritage and sovereignty. I’m confident that with resolve and determination, we can do this.