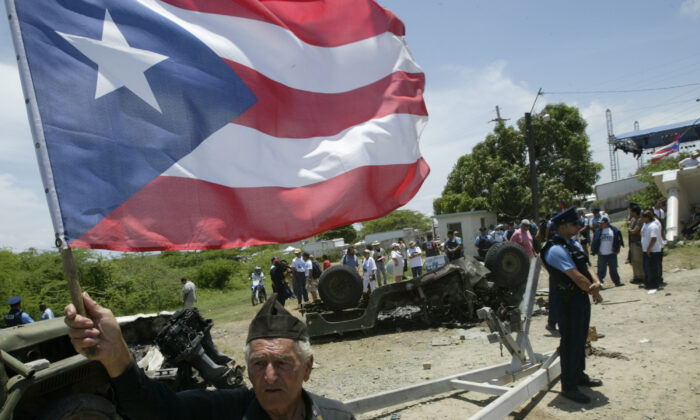 Bernardo Rivera celebrates holding a Puerto Rican Flag as he walks around a burned military vehicle at the former U.S. Naval Station Camp Garcia in Vieques, Puerto Rico, on May 1, 2003. The U.S. Navy abandoned Camp Garcia just before midnight on April 30 with a ceremony marking the land transfer back to Puerto Rico. Hundreds of protesters then rushed onto the former Navy area, destroying vehicles, burning flags and attacking buildings. Vieques served as a practice bombing range for U.S. Navy for almost 60 years. (Gerald Lopez-Cepero/Getty Images)
Viewpoints

What Does Puerto Rico Have to Do With Strategic Situation With China? A Lot

The parts of the United States called American territories aren’t well understood anymore. While a premier component of American superiority in the 20th century, in the age of Howard Zinn’s textbooks in the public school system, our territories now are ignored or simply used as cudgels in hyperbolic attacks against the rare historical experiment of a constitutional republic called the United States.

Of the five populated territories, Puerto Rico is the largest by land mass and population (roughly 3.3 million). The Department of Defense (DOD) gunnery and bombing range called Vieques Island became a cause célèbre for left-leaning personalities such as Al Sharpton in the late 1990s. With the peace dividend looming over DOD budgets in the later years of the Clinton administration and the raging theater and feigned outrage by non-Puerto Ricans, the DOD decision was made to shut down and depart—with dire strategic consequences for U.S. diplomacy and security being felt today.

The off-island activists won, slapped each other on the back, folded their roadshow, and departed, and a devastating economic toll was inflicted upon the residents—$300 million a year departed Puerto Rico in 2004 dollars with the loss of jobs and DOD funding. With the shutdown of Roosevelt Roads Naval Station and the related gunnery range on Vieques, the knowledge, memory, and understanding of Puerto Rico and its relationship to the rest of the United States has begun to fade, while the governance and social conditions across Puerto Rico started a downward spiral.

Puerto Ricans are increasingly frustrated, upset, and vocal about the corruption of state and local government. Hurricane Maria hit and devastated the island in 2017 and was a tipping point for the pre-existing dysfunction. Two more concerning phenomena are also occurring, a spike in fentanyl usage and a disconcerting flight of population (Hawaii also faces similar grave issues, stoked by the similar causal factor of dysfunctional state and local government).

As described to me by former Secretary of State and Puerto Rico Lt. Gov. Elmer L. Román, the “closure of Roosevelt Roads and the lack of a comprehensive U.S. strategy towards Puerto Rico has left the United States exposed in its furthermost eastern flank, weakened its sea control over the Caribbean, and potentially offsetting U.S. dominance in the Atlantic.”

In other words, putting an end to Mahan’s Sea power theory and the Monroe Doctrine.

As a strategic analyst and planner, the proper term to describe what’s going on in Puerto Rico is “vacuum” as in, “A vacuum is developing.” In other words, the situation in Puerto Rico is creating a strategic “vacuum” or offset with destabilizing issues including the loss of population, a surge in criminal activity, and the increase of foreign powers in the region. Nothing good ever comes from a vacuum, except the opportunity for someone else to come in and take advantage of the situation.

Puerto Rico is part of America; we can’t let this happen.

We must address the Puerto Rican situation with alacrity. The Chinese Communist Party’s (CCP) Silk Road effort is already roaming the Caribbean, Central America, and South America. To begin to change the dynamics in Puerto Rico, and as members of the American nation-state, the American citizens of Puerto Rico deserve better state and local governments. One key tenet is driving out the culture of corruption and replacing this dysfunction with the exact opposite.

There are other tangible measures that can be taken. In times of Great Power Competition, as Román expressed, it’s time for the United States to be blunt and reclaim what belongs to it from Chinese, Russian, or other foreign power influence. First is consideration of moving Southern Command from Miami to a reopened Roosevelt Roads Naval Station and airfield. Next is the movement of the U.S. Navy’s 4th Fleet from Mayport, Florida, to the same facility.

Ships such as one of the U.S. Navy’s new Expeditionary Sea Base ships could be homeported at Roosevelt Roads and would be an ideal traveling resource to engage with like-minded nations throughout the region in conducting training, counter-narcotics support, humanitarian assistance, and disaster relief support.

Part of the functions of the William J. Perry Center for Hemispheric Defense Studies and related Department of State training efforts could also be co-located at the same site. These would be clear and demonstrative messages of renewed U.S. focus and interest in the region and better place these activities closer to strategic partner nations. Because of good weather and an abundance of a trained labor force, a new Jones Act shipyard could be established to provide additional capacity and specialization for revitalized American shipbuilding.

Unique commercial ventures such as the Puerto Rico Spaceport initiative should receive special incentives to encourage greater use of the facility as the low Earth orbit satellite business expands. One rapidly developing phenomenon of grave concern is the Chinese focus on long-range hypersonic missiles, possibly leveraging an over-the-pole flight profile to approach the United States from the south. Sensor and defensive capabilities should be planned and implemented to integrate Puerto Rico into the defense of the entire United States from the new missile threat posed by the CCP.

Bring Situation, Opportunities to Center of US Discourse

Yes, the U.S. discourse is crowded, noisy, and confusing already, but the reality is that we have a part that’s struggling, and it’s unwise to do nothing. Giving statehood status (if the citizens of Puerto Rico want this), or at least immediately incorporating the territory, gist for another article, would bring Puerto Rico to the forefront of the core American news cycle, enabling positive dialogue and action.