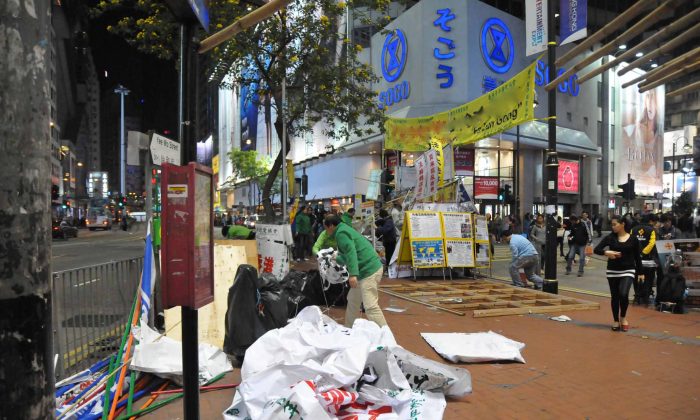 HONG KONG—An official notice hung in a plastic sleeve on a banner at the Star Ferry in Hong Kong on April 1 seems to mark the end of almost 10 months of unrelenting hate propaganda and harassment targeting Falun Gong practitioners in the special administrative region. That notice may have also served as a white flag of surrender by an increasingly desperate Communist Party faction.

The Youth Care Association initially targeted information sites like the one at Hung Hom. Practitioners there gave information to passersby, especially to tourists from mainland China, describing what the spiritual discipline of Falun Gong is and how it is persecuted in mainland China.

The Association sought to cover up not only Falun Gong banners but entire Falun Gong sites in locations throughout Hong Kong, attempting to wall them off from passersby with giant banners. In addition, Association members directly harassed the practitioners.

The green-shirted group would surround practitioners at their sites, use megaphones at close range to shout insults and threats, spit on them, and even, when the police were not looking, beat them, according to practitioners.

The Association began further ratcheting up the pressure in November by blanketing Hong Kong with their banners. Major boulevards were lined for miles with banners attacking Falun Gong, and the banners also popped up in all sorts of other locations—even children’s play lots.

Threatened with criminal prosecution and hefty fines, Association members complied, working for days to take down what they had spent months putting up.

The notices were also placed on Falun Gong banners. However, Falun Gong practitioners cite a 2005 decision by the Hong Kong Court of Final Appeal, which affirms the rights of practitioners to protest in Hong Kong public areas, as protecting their right to display banners.

The Hong Kong government had stood aside for ten months and not interfered with the Association’s interference with Falun Gong. The decision to order the removal of banners reflects changes that have taken place at the top of the CCP.

The Association was imported to Hong Kong from mainland China.

A former underground member of the CCP in Hong Kong told The Epoch Times that an official in the People’s Republic of China Liaison Office said in May 2012 that a group directly funded by the Party, at a high level, would soon begin attacking Falun Gong in Hong Kong.

The Party member was told the group would be supported by the CCP’s Political and Legal Affairs Committee (PLAC) and group members would be paid HK$20,000 per month (US$2,576. This is a sizeable wage. The average annual disposable income for urban residents in China in 2012 was US$4,000, according to state statistics).

The office appeared to be located next door to the 610 Office there, but a staff member inside the 610 Office explained that it and the Association shared office space and personnel. The Association’s leader was found to be a Party functionary from Jiangxi Province in mainland China.

The 610 Office is an extra-constitutional Party organ created by former CCP head Jiang Zemin for eradicating Falun Gong and has worked hand-in-glove with the PLAC.

According to a reliable source, the Association was the special project of Zeng Qinghong.

Zeng Qinghong is a former Politburo Standing Committee member, CCP powerbroker, and ally of Jiang Zemin. Zeng had for a long time controlled the Party’s administration of Hong Kong and Macau—until the Party’s meetings this past March.

Leung Chun-ying, elected Hong Kong’s chief executive in March, 2012, had been groomed for his position by Zeng. When Zeng wanted to bring in the Association, Leung supported him.

In fact, according to The Epoch Times source, Zeng’s plan went beyond closing Falun Gong information sites. He intended to incite practitioners to violence in a desperate attempt to bolster the standing of the Jiang Zemin faction.

Jiang Zemin and the members of his faction fear being held accountable for the crimes they committed in the persecution of Falun Gong.

Zeng, the source said, wanted to goad Falun Gong practitioners into turning to large-scale violence against the Association. The Hong Kong government would then need to step in to restore order, spilling blood in the process.

In either case, the faction of Jiang Zemin could point to blood spilt by Hu or Xi. Hu or Xi could then not accuse Jiang’s faction of mistreating Falun Gong without also accusing themselves, the thinking went.

In addition, international society would see Falun Gong being put down in Hong Kong and would conclude that the policy of persecution was not changing. Jiang’s faction would appear still to be in business.

Change at the Top

Leung, after becoming head of the Hong Kong government, found he lacked friends at the top of the Party.

Hu Jintao, angered by moves Leung had made, humiliated him by ordering him not to attend the APEC meeting in September 2012. When the newly installed Party head Xi Jinping toured southern China’s Guanzhou Province in December, he snubbed Leung, refusing to meet with him.

Meanwhile, Xi Jinping asserted his control. He downgraded the status of the Hong Kong Liaison Office. At the Party meetings in Beijing in March, he put his own people in charge of Hong Kong and Macau affairs.

According to an inside source, when Leung did meet with Xi Jinping, Xi reminded him to follow closely the policy of “one country-two systems,” which respects Hong Kong’s British-based traditions of individual rights and the rule of law.

The scene of the Hong Kong train stations and airport covered with the Association’s propaganda banners reminded officials in Beijing of the excesses of the Cultural Revolution.

They called on Leung Chun-ying “not to cross the line,” according to an inside source. This eventually led to the Hong Kong government ordering the removal of all banners.

Zeng’s use of the Youth Care Association appears to have been defeated.

Most remarkably, Zeng’s plan depended on Falun Gong practitioners, who have peacefully endured almost 14 years of persecution, to suddenly turn to violence.

Zheng Lanxing was at Hum Hong train station when the Hong Kong Youth Care Association first made itself known. As a Falun Gong practitioner, she tries to live according to the principles of truthfulness, compassion, and tolerance.

“When they harassed us, I approached the members of the group and told them about the persecution of Falun Gong,” Zheng said. “I could see some of them were moved and held back. But then the bosses gave orders and the group acted more violently.”

The peaceful endurance of Zheng and her fellow practitioners prevailed, but the attack on them has not entirely ended.

Kan Hung-cheung, the spokesperson for the Hong Kong Falun Dafa Association, said, “Falun Gong practitioners have the legal right to display banners and set up information sites. We hope that the Hong Kong Government will respect and really uphold these basic rights and prevent the CCP from disturbing Falun Gong again.”

Translated by Virginia Wu and Frank Fang. Written in English by Stephen Gregory.