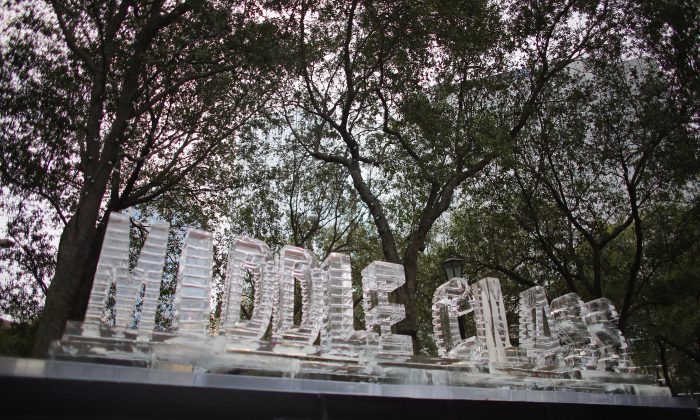 An ice sculpture reading Middle Class is displayed as people gather to protest before the beginning of the Republican National Convention on August 26, 2012 in Tampa, Fla. The idea of the American middle class expanding, lifting the poor up, is not borne out in the last 33 years. Wages are stagnant as productivity has risen. (Joe Raedle/Getty Images)
US

Wages increased a paltry 5 percent as productivity grew 74.5 percent between 1979 and 2012
By Gary Feuerberg

WASHINGTON—The prospects that the American economy will grow and raise millions of poor people to the middle class look bleak according to the analysis of wage data since 1979.

Wages have increased on average 5 percent, while productivity increased 74.5 percent during 1979-2012, according to a briefing paper released Aug. 21 by the Economic Policy Institute (EPI).

The fruits of the labor are not being transferred in the form of higher wages.

The news is worse for the vast majority of wage earners during the recent decade, 2002-2012: Wages have flattened or declined.

Authors Lawrence Mischel and Heidi Shierholz conducted a comprehensive analysis of wage trends analyzing various data derived from the Bureau of Labor Statistics and the Current Population Survey. Dr. Mishel is an economist and president of EPI, and Dr. Shierholz is an economist at EPI.

Mishel and Shierholz concluded that it doesn’t matter whether the worker is white-collar or blue-collar, or with or without a college degree, the last decade saw wage stagnation. Regardless of occupation, gender, race/ethnicity, or education level wages have grown anemically, if at all, while productivity grew by nearly 25 percent from 2000-2012, according to their paper, “A Decade of Flat Wages.”

The economic picture got bleaker this year, according to Robert Reich, former Secretary of Labor in the Clinton administration, in his blog on Aug. 25:

“The percent of Americans living below the poverty line has been increasing even as the economy has started to recover—from 12.3 percent in 2006 to around 14 percent this year. More than 35 million Americans now live below the poverty line. Many of them have jobs. The problem is these jobs just don’t pay enough to lift their families out of poverty.”

In his speech marking the 50th anniversary of the March on Washington, President Barack Obama said Aug. 28 at the Lincoln Memorial:

“For over a decade, working Americans of all races have seen their wages and incomes stagnate. Even as corporate profits soar, even as the pay of a fortunate few explodes, inequality has steadily risen over the decades. Upward mobility has become harder. In too many communities across this country in cities and suburbs and rural hamlets, the shadow of poverty casts a pall over our youth…”

Great Recession and Before

The report broke down wages during the period beginning with the Great Recession (2007-2009) and ending in 2012. Wages overall dropped for the bottom 70 percent of the wage distribution.

However, the cause cannot be attributed wholly to the collapse of the economy and loss of jobs during the Great Recession, which officially occurred from Dec. 2007 to June 2009. Weaknesses in the economy were apparent in the period before.

“Between 2000 and 2007, the median worker saw wage growth of 2.6 percent, despite productivity growth of 16 percent,” says the report.

The authors found that at the beginning of the century, between 2000 and 2002, wage growth continued from the momentum of brief wage growth in the late 1990s, but that fizzled out. Between 2002 and 2012, “the vast majority of wage earners have already experienced a lost decade, one where real wages were either flat or in decline.”

Reich called for an increase of the minimum wage from the current $7.25 an hour to $10.50, and to $15 in areas of the country where the cost of living is higher. “Had the federal minimum simply kept up with inflation from the late 1960s, it would already be well over $10 today,” he writes.

In his July 24 address at Knox College in Galesburg, Ill. President Obama emphasized the breakdown of the American model of an ever-expanding middle class bringing shared prosperity.

“In the period after World War II, a growing middle class was the engine of our prosperity… But over time, that engine began to stall. That bargain began to fray. Technology made some jobs obsolete. Global competition sent others overseas. It became harder for unions to fight for the middle class. Washington doled out bigger tax cuts to the rich and smaller minimum wage increases for the working poor. The link between higher productivity and people’s wages and salaries was severed. The income of the top 1 percent nearly quadrupled from 1979 to 2007, while the typical family’s barely budged.”

The report can be found at:
http://www.epi.org/publication/a-decade-of-flat-wages-the-key-barrier-to-shared-prosperity-and-a-rising-middle-class/