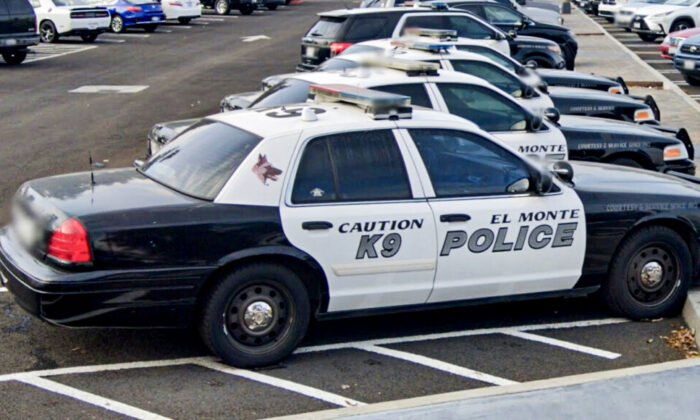 A man who allegedly killed two police officers in a June 14 motel shooting in El Monte, California, died at the scene by suicide, the county coroner’s office reported on June 18.

Justin Flores, 35, died on a sidewalk outside the Siesta Inn near the San Bernardino (10) Freeway, with his cause of death identified as a “gunshot wound of the head” in the manner of suicide, according to the Los Angeles County Department of Medical Examiner-Coroner’s online records.

The shooting occurred at about 5:10 p.m. on Tuesday at the motel when El Monte Police Department Officer Joseph Santana, 31, and Cpl. Michael Paredes, 42, were responding to a stabbing report, according to the Los Angeles County Sheriff’s Department.

Flores allegedly shot Santana and Paredes in a room before running outside into a parking lot, where he exchanged gunfire with other arriving officers and later turned the gun on himself, authorities said.

The two officers were taken to Los Angeles County-USC Medical Center, where they both were pronounced dead.

Flores’s wife, Diana Flores, told CBS2 on Thursday she was at the motel room with him when the 911 call was made, saying the responding officers “were trying to help [her].” She said she tried to warn the officers that Flores had a gun before they went into the room.

“I’m so deeply sorry,” she said. “My condolences for saving me.”

While the investigation is still ongoing, Los Angeles County District Attorney George Gascón has been criticized for his justice system reforms.

With a history of arrests, Flores was charged with methamphetamine possession in 2020, along with being a felon in possession of a weapon and ammunition. He was given a plea deal last year that allowed him to avoid prison time for two of these charges, which were later dropped by Gascón’s office. Flores was later placed on two years of probation, and 20 days in jail.

“I blame the death of my son and his partner on Gascón,” Santana’s mother Olga Garcia said at a news conference Friday outside police headquarters. “Gascón will never know how he destroyed our families. … Crime is so high in California because criminals don’t stay in jail long enough. We need to make criminals responsible for their actions. We need law and order.”

The District Attorney’s Office on June 15 issued a statement saying that the decision was “consistent with case resolutions for this type of offense given his criminal history and the nature of the offense” since “Flores did not have a documented history of violence” at the time of sentencing.

A candlelight vigil for the fallen officers was scheduled for Saturday at 7 p.m. at the El Monte Civic Center.