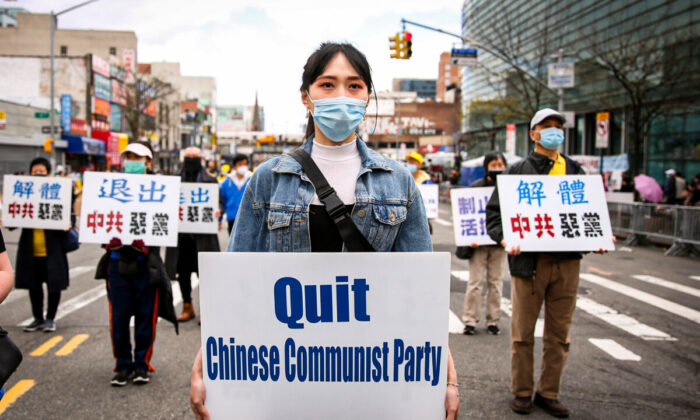 Nearly 400 million Chinese have renounced their affiliation to the Chinese Communist Party (CCP) as part of what might be China’s largest and longest-lived grassroots movement, according to Sen Nieh, vice president of the nonprofit Global Service Center to Quit the CCP.

The movement, called “Quit the CCP” or “Tuidang” in Chinese, is about “the individual’s choice that they don’t want to associate or identify with CCP affiliates anymore,” Nieh, a professor of mechanical engineering at the Catholic University of America, told EpochTV’s “American Thought Leaders” program on April 19.

In China, from childhood to adulthood, citizens are often induced to join the CCP and its affiliate organizations—the Communist Youth League and the Young Pioneers—by taking an oath, swearing loyalty to the Party.

Quitting the CCP is a “quiet and moral awakening of the individual’s inner self,” which comes from an understanding that they don’t want to be part of the CCP’s malign actions, Nieh said.

What spurred the movement, he said, was the release of “Nine Commentaries of the Communist Party,” a book first published by the Chinese-language edition of The Epoch Times in 2004 that explores the history of deception and murder perpetrated under the CCP’s totalitarian rule.

Nieh said millions of copies of the book have made their way into China, which has helped people learn about the crimes committed by the Communist Party. Many of those copies were and are still distributed by adherents of Falun Gong, a spiritual discipline that has been brutally persecuted by China’s communist regime since 1999.

After reading the “Nine Commentaries,” Chinese citizens started “sending statements to The Epoch Times, [saying] they wanted out, one after another,” said Nieh.

This prompted the creation of The Global Service Center to Quit the CCP, which aids those who want to renounce the Party. The center set up a website where people can withdraw from the CCP in a public statement.

Over the past 17 years, the center has documented 394 million withdrawals from the CCP, which is more than the population of the United States, Nieh noted.

Some quit with their real name and location. But many use aliases to protect their identity, thus preventing retaliation from the Party.

“The participants don’t know each other; they don’t want to be known by others. They just want to have inner peace that they cut down their connection to the Communist Party,” Nieh said.

“It’s about how Chinese people try to break out of the bondage from communism.”

Regarding the impact of Party withdrawals, Nieh said that, even though that’s not its purpose, the movement is inevitably weakening the CCP from within.

The professor said mainland Chinese are often indoctrinated by the regime’s propaganda and its sophisticated online censorship mechanism known as the “Great Firewall”—which blocks internet access to websites and information deemed sensitive by the CCP.

“They know they’ve been brainwashed, but they don’t know how [they’ve] been brainwashed. So once they have a chance to assess the free information, or come out of China, they like to learn more about their own country,” he said.

He said that, while younger generations often have more access to outside information by using VPNs that bypass the Great Firewall, senior citizens might lack that access.

For this reason, Nieh said, the Global Service Center has been helping people quit the CCP by making phone calls to China: A machine calls random numbers from mainland China, and when someone picks up, it plays a short message that explains the nature of the Party or the crimes committed by it. Receivers are then given the option to listen to another message, withdraw from the CCP, or talk to someone from the center.

The center, now registered as a 501(c)(3) nonprofit organization, has offices in Flushing, Taiwan, and Hong Kong. It can’t afford to pay for employees, so it relies exclusively on the help of volunteers, Nieh said.

To pay for expenses, such as the machines for robocalls, it depends on donations, which can be made on the center’s official website, he said.