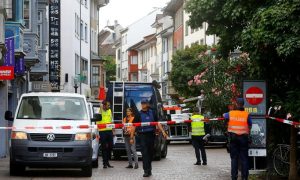 An Australian grandfather recently shared his dramatic survival story of accidentally chainsawing his own face in half.

Bill Singleton, 68, cleaved his face and tongue in two with a chainsaw and then had to drive 20 miles to the nearest hospital for medical help.

Singleton detailed his fight for life in a March 7 podcast, “How I Survived.”

The Melbourne man told his wife, Lynette, he was going out to chop firewood on that fateful day in 2016, and would be back home soon. He drove out to a remote location and began to process the wood.

(Warning: image may disturb some readers)

Grandfather drives himself to hospital after slicing his face in HALF with chainsaw https://t.co/khImC5SUZw

“I sussed out a couple of good logs of timber and went back to my ute,” he said, according to The Daily Mail.

“I had two chainsaws, a small one and a big one. I got the big saw out, started it up, and of course it roared into action.”

Instead of tearing through the wood, however, the whizzing chain bounced off the log and kicked back towards his face. The razor-sharp saw penetrated his mouth, cut through his bottom lip, and gouged all the way back to his wisdom teeth.

“I heard this crack. I didn’t feel anything at the time, and I thought “oh my goodness.'”

Grandfather forced to drive himself to hospital after nearly taking his own head off with a chainsaw. #7News https://t.co/5s7gxyLaPf

His face mangled, Singleton dropped to his knees and feverishly pressed a handkerchief into the wound to try and stop the bleeding.

The grandfather had his phone on him, but realized calling for help would be futile since his tongue had been ripped in two.

So he dragged himself to his truck, crafted a makeshift sling, and used his other arm to steer himself almost 20 miles to hospital, the Daily Mail reported.

“What was I supposed to do? Sit myself down at the base of a tree and lean back and wait for the lights to go out?” he mused.

The surgeon who led the team that fixed his face said Singleton might not have made it if he’d caught a good look at himself in his vehicle’s rear-view mirror.

“I think somewhat ignorance was the saviour of the day… and good old Aussie guts,” Associate Professor Alf Nastri, head of maxillofacial surgery at the Royal Melbourne Hospital told The Age.

An x-ray of his skull showed the terrifying extent of the damage.

In @tennewsmelb at 5pm.
We speak to "chainsaw man" Bill Singleton.
A miracle survival after a horrible accident. pic.twitter.com/evXeHq0GQJ

Surgeons worked for hours to put Singleton’s face back together. He lost most of his teeth and his jaw had to be fixed with a metal plate.

He had also apparently come extremely close to severing his carotid artery and his larynx.

Surgeon Professor Nastri was quoted saying, “He basically just looked like someone who was a gunshot wound victim. He split the whole part of his face open. It was like something out of a science fiction movie.”

It took weeks for Singleton to learn how to talk again due to nerve damage that left his tongue permanently numb. Within days of his release from hospital, however, he was out and about again looking for firewood.

Three years on, Singleton has since undergone two more surgical procedures to fix his metal jawline and prepare his gums for a fresh set of teeth.

He said the worst thing about the ordeal was the forced change to his diet. According to his wife, “He’s just dying for a steak.”