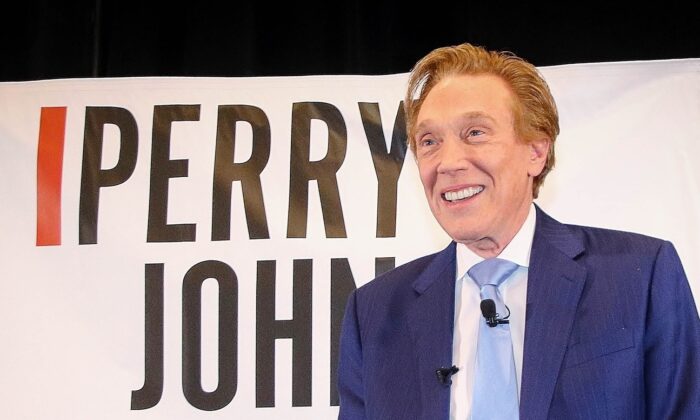 Businessman Perry Johnson is one of five Michigan GOP gubernatorial candidates who were disqualified from the primary ballot. (Photo from Perry Johnson's Facebook page)
2022 Midterm Elections

Legal action was promised after five of the 10 Republican candidates were disqualified from Michigan’s gubernatorial race on May 26.

On May 27, Oakland County entrepreneur Perry Johnson, one of the disqualified candidates, filed a lawsuit in the Michigan Court of Appeals, asking the court to require that the state’s Board of State Canvassers certify him for the Aug. 2 primary ballot.

Brown said he would withdraw from the race while the other four disqualified candidates vowed to fight the ruling. Johnson was the first of the four to proceed with legal action. Craig and Markey have promised they will file lawsuits to get on the ballot.

“We are confident that when the law is justly applied, our campaign will be on the ballot this August,” Craig said in a statement.

In his lawsuit, Johnson asked for expedited consideration by June 1 because the state must know who is on the ballot by June 3 so the process of proofreading and printing absentee ballots can begin.

The mailing of absentee ballots is slated to start on June 18.

Keeping the candidates off the ballot is “the right result, because there was clearly overwhelming evidence of forgery on a massive scale on both of their petitions.” Mark Brewer, an attorney who challenged Craig’s signatures on behalf of the Michigan Democratic Party, told the Bridge Michigan news organization, referring to Craig and Johnson.

“What kind of message does it send if any candidate with forged signatures is allowed on the ballot?” Brewer said via Twitter. “Michigan must have zero tolerance for forgery: All candidates must be disqualified, and all circulators and anyone who knew about forgery must be prosecuted.”

The state inspected every signature, according to MLive, but only compared 7,000 of the 68,000 believed to be fraudulent against the state’s Qualified Voter File, which has images of signatures from every registered voter.

The Bureau of Elections didn’t discover any matching signatures among the Qualified Voter File and opted to toss out all of the other signatures for the 36 petition circulators suspected of fraud.

The state should review all 68,000 signatures and not dispose of signatures just because they are gathered by a fraudulent circulator, the candidates argue.

The law also says that signatures can be made invalid without checking them against the Qualified Voter File if evidence shows that a false statement was made on a petition.

In its 336-page complaint to the Court of Appeals, Johnson’s team called the decision a “shotgun approach.”

The Michigan Bureau of Elections referred its findings last week to Attorney General Dana Nessel for a criminal investigation.

In a meeting on May 26, when the bureau reviewed the petitions and heard testimony from candidates, Michigan Elections Director Jonathan Brater said there was an “unprecedented scale of fraud.”

“In the past, we’ve had the ability with very little difficulty to process a relatively small number of dubious signatures that we see in the ordinary course of processing of petitions,” Brater said.

“They’re scattered throughout the petitions, and we can look them up as we get to them. There was no possible way to do that approach here and get an accurate recommendation to the board.

“The circulators here committed fraud. They used the names of people who either weren’t registered, or they were registered and they forged their signatures.

“This is no mistake. These circulators knew they were doing this. They did this deliberately, and staff is confident in saying that these signatures should not be counted.”

Among the five disqualified candidates, Johnson is closest to the 15,000 mark. He submitted 13,800 valid signatures and 9,393 invalid signatures, according to the Michigan Bureau of Elections.

Johnson, who began his campaign with an ad aired during the Super Bowl, pledged $2.5 million of his own money in his quest to win the GOP primary and seek to unseat Democratic incumbent Gov. Gretchen Whitmer.

Brandenburg called the state’s process “an assault against the American people on every single level” and “an arbitrary goat rodeo.”

Markey said that the state didn’t take the time to look through his signatures.

“I just don’t think they had the time,” Markey said in a statement. “I think they got to ours and just said, ‘You know what, all these other players weren’t doing a good job, so he must be part of this group.’ We were not.”

In a public comment during the meeting, Michigan Republican Party Chief of Staff Paul Cordes said “you cannot change the rules midway through the game” and that all five candidates should be on the ballot.

“I don’t refute that systematic fraud occurred, but both the law and guidance on evaluating signatures prohibits the wholesale rejection of pages of petitions and tens of thousands of signatures without any review,” Cordes said. “The opposite was done here.”

If the ruling to disqualify the five candidates stands, it will cause a shake-up in the GOP primary and impact the Republican party’s chance to defeat Whitmer in November.

A May 2 poll by the Glengarriff Group showed Craig with a commanding lead at 23 percent, followed by Soldano at 8.2 percent. Johnson was a distant fifth at 5.2. Brown had 2.2 percent, Brandenburg 2 percent, and Markey Jr. was last with 0.2 percent. The survey indicated that 44.6 percent of respondents were undecided.

A Trafalgar Group poll conducted between March 29 and March 31 showed a different result among the top of the field with Craig at 34.4 percent, Johnson at 16.1 percent, and Soldano with 14.7 percent.