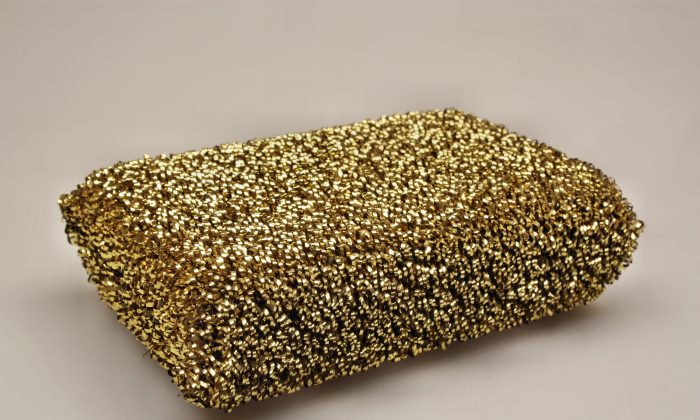 "Nanoporous gold can be imagined as a porous metal sponge with pore sizes that are a thousand times smaller than the diameter of a human hair," says Erkin Şeker. (Adam88xx/iStock)
Science

Sponge-like nanoporous gold could be key to new devices for detecting disease-causing agents in humans and plants, say researchers.

Two recent papers demonstrate that the team could detect nucleic acids using nanoporous gold, a novel sensor-coating material, in mixtures of other biomolecules that would gum up most detectors.

This method enables sensitive detection of DNA in complex biological samples, such as serum from whole blood.

“Nanoporous gold can be imagined as a porous metal sponge with pore sizes that are a thousand times smaller than the diameter of a human hair,” says senior author Erkin Şeker, assistant professor of electrical and computer engineering at University of California, Davis. The findings appeared online in the journal Analytical Chemistry in April and August.

“What happens is the debris in biological samples, such as proteins, is too large to go through those pores, but the fiber-like nucleic acids that we want to detect can actually fit through them. It’s almost like a natural sieve.”

Rapid and sensitive detection of nucleic acids plays a crucial role in early identification of pathogenic microbes and disease biomarkers. Current sensor approaches usually require nucleic acid purification that relies on multiple steps and specialized laboratory equipment, which limit the sensors’s use in the field. The researchers’s method reduces the need for purification.

“So now we hope to have largely eliminated the need for extensive sample cleanup, which makes the process conducive to use in the field,” Şeker says.

The result is a faster and more efficient process that can be applied in many settings.

The researchers hope the technology can be translated into the development of miniature point-of-care diagnostic platforms for agricultural and clinical applications.

Nanotechnology Shines a Light Inside Cells

“The applications of the sensor are quite broad ranging from detection of plant pathogens to disease biomarkers,” says Şeker.

For example, in agriculture, scientists could detect whether a certain pathogen exists on a plant without seeing any symptoms. And in sepsis cases in humans, doctors might determine bacterial contamination much more quickly than at present, preventing any unnecessary treatments.

Funding comes from the UC Davis Research Investments in the Sciences and Engineering (RISE) program, as well as the UC Lab Fees Research Program and the National Science Foundation.

This article was originally published by University of California, Davis. Republished via Futurity.org under Creative Commons License 4.0.