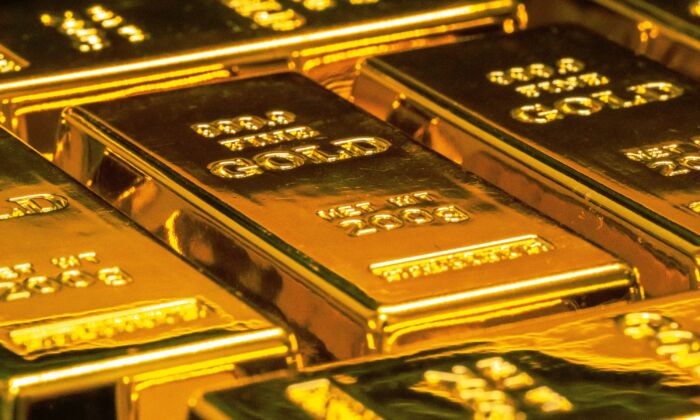 A stock photo of gold bars. The price of the yellow metal has increased following market uncertainties due to the Russian invasion of Ukraine. (Jingming Pan/Unsplash)
Gold and Commodities

Gold and Palladium Prices Spike on Russian Invasion of Ukraine

Prices of gold and palladium have increased after the Russian invasion of Ukraine, driven by supply concerns and investors seeking out a safe haven in the yellow metal.

Investors rushed to park their money in gold as Russia’s invasion of Ukraine created widespread uncertainty in the markets. During times of political or financial uncertainty, gold is often seen as a hedge against potential inflation and also as a means of preserving wealth.

“A protracted escalation could see gold rising to or above $2,000 per ounce in the short-term,” UBS Investment Bank analyst Giovanni Staunovo told Reuters. “Platinum and palladium are supported on availability concerns.”

Joni Teves from UBS estimated that the gold market will soon revert back, with the bank expecting gold to end up near the $1,600 per ounce level by the end of 2022.

In its upcoming March meeting, the U.S. Federal Reserve is expected to increase interest rates in a bid to rein in inflation, a decision that Teves believes will put downward pressure on gold.

“An environment where real rates are rising and the Fed is tightening policy does provide a negative backdrop for gold,” Teves told CNBC. “We do think that the strength should ultimately … be short-lived.”

Russia is a major supplier of both gold and palladium. As such, if the current Ukraine crisis harms Moscow’s output, their prices could spike even more.

Russia is the third-largest producer of gold in the world, after China and Australia. It accounts for roughly 10 percent of annual worldwide mine production. In 2021, Russia’s gold output was 3,500 tons.

In palladium, Russia has an even more favorable position. In 2021, Russia’s palladium output of 2.6 million troy ounces accounted for 40 percent of the world’s mine production.

Palladium is critical for the automobile industry, as the metal is used to create catalytic converters, which transform the toxic substances produced by the engine’s exhaust into less harmful or non-toxic substances, helping vehicles maintain environmental standards. Electronics such as laptops and cellphones also make use of palladium.

“If we see a set of sanctions that reduce financing and free flow of the material to the rest of the world, we could see a significant tightening of conditions for palladium probably in the not too distant future,” Bart Melek, global head of commodity market strategies at TD Securities, told Reuters.

Melek predicts that palladium prices will once more reach the highs of 2021, breaching the $3,000 per ounce level.