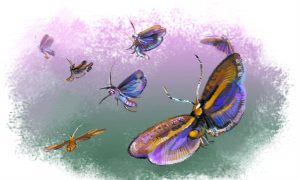 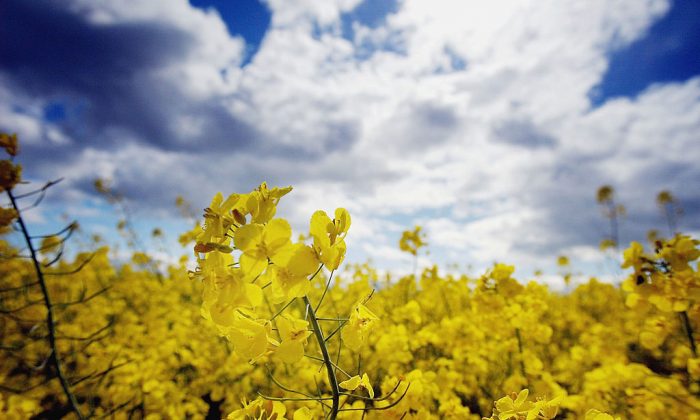 A field of oilseed rape in Perthshire, Scotland, in this file photo. (CHRISTOPHER FURLONG/GETTY IMAGES)
GMOs and Biotech

America has barely gotten a handle on how to deal with the kinds of genetically modified organisms (GMOs) that have been around for decades.

Now, a new kind of GMO is available in grocery stores, and regulators are divided on how to approach it.

The new technologies—which have gained traction in the past five years—are different from the genetic modification that is commonly used. They are more precise, and scientists say they pose a lower risk of causing unintended changes to the DNA. But they are the same in that they artificially change the DNA of organisms.

They go by many different names, often eluding the notice of a public wary of GMOs. Crispr-Cas9 and Talen are the names of two specific technologies, for example, and “new plant breeding techniques” or “gene editing” are a couple of the broad terms being used.

Currently, about 5 percent of U.S. canola is grown from seeds modified with one of these new technologies, and companies are poised to commercially launch new products within the next year or two. Corn, soybean, flax, and other food crops will be created with the new techniques.

Officials in the United States and abroad have established some regulations for GMOs. But, by and large, these new techniques are not subject to those regulations. This is because the definitions of what constitutes a GMO vary among regulatory bodies and often do not cover these new technologies.

Proponents say these products should not be considered GMOs because of key advancements in the technologies. Opponents say modifying genes is genetic modification, no matter how you slice it—and it should be regulated as such.

Both traditional and new genetic engineering technologies have variations and complexities, but generally speaking, the difference is as follows.

The older techniques create plants with desirable traits by clumsily forcing genes from different species into the plants’ DNA. For example, a gene can be taken from a bacterium and inserted into a corn plant’s DNA to make the plant resistant to pests. Another commercially available product is a soybean that has a gene from a bacterium that makes it herbicide-resistant.

The new techniques, on the other hand, can target the desired genes more precisely and change them without including foreign DNA.

It essentially uses molecular machinery created in a lab to snip and bond a plant’s DNA, removing undesired genes or creating new combinations. For example, Minnesota-based biotech company Calyxt has removed the gene in a potato responsible for the degradation of sugars, thus giving the potato a longer shelf life. Some scientists and consumer advocacy groups have expressed concern that this manipulation may still create unintended effects and should be further tested and regulated like any other GMO.

Some regulators agree, some don’t. How they define GMO makes all the difference.

In Marin County, California, an ordinance called Measure B was passed in 2004 banning GMO cultivation.

“At the time the ordinance was written and voted upon by the residents, it blanketed all modification,” said Stacy Carlsen, Marin County agricultural commissioner, via email. “This GMO technique (Crispr-Cas9) would be prohibited as defined in the current ordinance. The technique is gene modification.”

The National Organic Standards Board (NOSB) of the U.S. Department of Agriculture (USDA) voted in November to prohibit the new techniques from being used in any organic production nationwide.

“It is more imperative than ever that the organic community be very clear about where the line is drawn regarding genetic engineering,” the board noted in its formal recommendation.

“Every organic stakeholder is clear that genetic engineering is an imminent threat to organic integrity. The NOSB must make, to the extent it can, every effort to protect that integrity.”

The board clarified that it defines GMO as any organism that has had its genetic material altered by biotechnology.

But the hallmark federal GMO legislation passed last year has a more specific definition, which does not apply to plants created using the new techniques. That law will require traditional food GMOs to be labeled with QR codes that consumers can check with their smartphones.

Biotechnology and policy expert Michael Rodemeyer explained that because federal law defines GMOs as something created using DNA from different organisms, and that could not be found in nature, the new techniques escape its net.

His opinion is that the regulations will not change much any time soon to address these new techniques. “I think we’re likely to have the status quo, and all the uncertainty about the status quo, for some time to come.”

GMOs have thus far been handled by various agencies using a mishmash of regulatory framework that existed long before GMOs did.

For example, the USDA regulates genetic modification that uses plant pathogens to tinker with DNA because the department already had the authority to regulate pathogens.

Similarly, the Environmental Protection Agency (EPA) regulates the safety of pesticides and therefore has authority over insect-resistant genetically modified plants.

The Food and Drug Administration (FDA) has a voluntary consultation process in place for GMO foods. Companies developing GMOs can approach the FDA with internal evaluations they have completed on their own food products.

All of these approaches to regulation so far have not applied to the new technologies.

Since these new technologies don’t use plant pathogens or other substances regulated by the USDA, the administration has already told biotech companies that it has no authority over the resulting products.

The FDA looks at the product and not the process—so whether the food is produced using traditional breeding, or traditional or novel genetic modification techniques, it makes no difference so long as the final plant product looks the same.

Biotech company Calyxt has developed a soybean using a technique called Talen, which removes a gene so the soybean oil has less trans fat. Calyxt has engaged in the voluntary FDA process, according to the company’s chief science officer and one of the inventors of Talen, Dan Voytas.

The FDA is looking at the fatty acid and protein composition of Calyxt’s soybean oil and comparing it to other commercial oils. The administration says it looks similar to what’s already on the market, Voytas said.

Calyxt’s soybeans are grown on about 1,000 acres in the upper Midwest of the United States, said Voytas, and the company anticipates it will soon start selling its seeds to farmers. Other food crops made using these new techniques are already on the market.

For example, California-based Cibus’s new SU Canola is herbicide-resistant. It is now available in the United States, where canola is widely used to make cooking oil. The SU Canola currently accounts for about 5 percent of the U.S. market with 70,000 acres planted, and is on track to enter the Canadian market in 2017.

While the FDA hasn’t regulated food crops produced using the new techniques, it has said it will regulate any animals created.

The administration will treat any intentional alteration of an animal’s genome as a drug, “because it is intended to alter the structure or function of the animal and, thus, subject to regulation under our provisions for new animal drugs,” states the FDA on its official blog.

Greenpeace is adamant that the new techniques should be considered genetic modification—whether it’s used in plants or animals. Franziska Achterberg, Greenpeace’s European Union (EU) food policy director, said via email that the European Commission has not taken a definitive stance on whether the new techniques will fall under the EU’s GMO legislation.

The commission was supposed to publish a legal assessment of the new techniques last year, but didn’t and no longer intends to, said Achterberg. “We looked at commission documents released under Freedom of Information laws and found that this had to do with U.S. lobbying, among other things.”

The Non-GMO Project—a nonprofit that is the lead provider of verification and labeling for non-GMO foods in North America—considers foods produced using the new techniques to be GMO. It will withhold its label from all such foods, said executive director Megan Westgate, in an email.

The Non-GMO Project has thus chosen to include the use of these new techniques in its definition of GMO. Its label is currently the best guarantee a consumer can get that a product is GMO-free.

Older genetic modification technologies were never used directly on humans, but according to a 2015 study, scientists in China began using Crispr-Cas9 to remove disease-causing genes from human embryos. Congress banned this practice last year, despite pressure from some scientists who think the United States will fall behind other countries in the development of biotechnology.

A U.S. federal biosafety and ethics panel did, however, approve the injection into humans of cells that have been modified with Crispr-Cas9 to attack cancer.