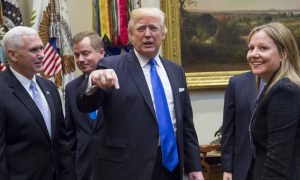 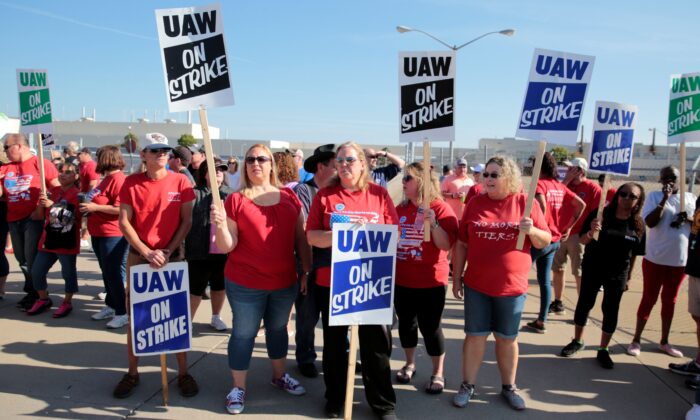 GM Strike Enters 2nd Week With No Reports of Progress

Some 46,000 General Motors (GM) employees have refused to work for their eighth day running as their union negotiates with the automaker’s leadership over pay hikes and job losses.

Neither side reported any progress over the weekend.

“We continue to talk, and our goal remains to reach an agreement that builds a stronger future for our employees and the company,” GM spokesman David Barnas said in an email.

The union, United Automobile Workers (UAW), didn’t respond to a request for comment.

The UAW launched the strike on Sept. 15, after its contract with GM expired upon failed negotiations.

The union wants jobs to be preserved for workers affected by GM’s decision to shut four facilities in the United States. It also wants workers’ salaries to grow faster and to limit the use of temporary workers, among other demands, people briefed on the negotiations told The Wall Street Journal.

GM has offered to invest more than $7 billion in eight facilities in four states and create 5,400 jobs, which would include hiring at least some of the employees affected by plant closures. It also promised wage increases, “improved” profit-sharing, and other improvements.

A major issue is the fate of the Lordstown, Ohio, plant that until six months ago made the Chevrolet Cruze.

Under pressure from President Donald Trump, GM announced talks in May to sell the idled plant to electric truck startup Workhorse. It also proposed building a battery plant nearby.

But the union wants the plant to get another car to build.

The plant used to employ some 4,500, but that dropped to about 1,400 before it closed. Most of those workers have taken transfers to other GM plants, but around 450 workers have not, many because they didn’t want to uproot their families.

Even if the Workhorse deal goes through, workers wonder how many people the plant would employ, whether they would still be working for GM, and what kind of pay cut that would entail.

UAW workers at the top of the wage scale earn about $31 an hour, compared with the $15–$17 hourly wage workers are paid at a GM battery plant near Detroit that operates under a side agreement.

“If they made batteries here, it would allow them to lower wages to the bare minimum,” said Teresa Oakes, 44, who worked at the Lordstown plant for 10 years. “GM should bring back vehicles they make in Mexico and have them made by U.S. workers instead.”

Analysts say neither a Workhorse nor a GM plant would be likely to employ even half the plant’s previous workforce.

“Nothing other than vehicle production has even a hope of replacing the jobs and income and economic impact of what was previously there as an automotive assembly plant,” said Kristin Dziczek, vice president of industry, labor, and economics at the Center for Automotive Research based in Ann Arbor, Michigan.

“There’s no chance that GM is going to put a product back into that plant,” he said. “They have too much capacity as it is.”

President Donald Trump has called on companies to move their production to the United States as part of his “America First” policy. He previously called on the company to consider closing one of its plants in China or Mexico rather than the Ohio one.

“I don’t want General Motors to be building plants outside of this country. As you know, they built many plants in China and Mexico, and I don’t like that at all,” Trump said on Sept. 16.

GM has said that it has 33 manufacturing sites in the United States “and just four in Mexico.”