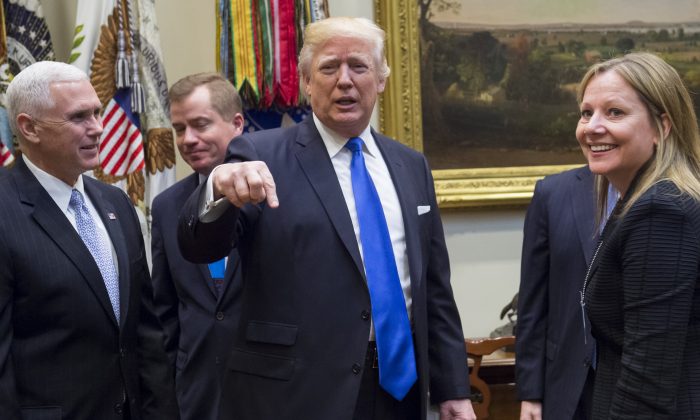 President Donald Trump greets General Motors CEO Mary Barra (R) alongside US Vice President Mike Pence (L) prior to a meeting with automobile industry leaders in the Roosevelt Room of the White House in Washington on Jan. 24, 2017. (Saul Loeb/AFP/Getty Images)
By Ivan Pentchoukov

President Donald Trump ratcheted up his criticism of General Motors on March 18 over the company’s plan to close a plant in Lordstown, Ohio.

In addition to his prior request that the automaker keep the Lordstown factory open or sell it to a company that would, the president said GM should consider closing a “plant in China or Mexico,” where the company invested heavily prior to Trump taking office.

“General Motors and the UAW are going to start ‘talks’ in September/October,” Trump wrote on Twitter, referring to the United Auto Workers union, which is negotiating with GM.

“Why wait, start [the talks] now! I want jobs to stay in the U.S.A. and want Lordstown (Ohio), in one of the best economies in our history, opened or sold to a company who will open it up fast!” the president continued. “Car companies are all coming back to the U.S. So is everyone else. We now have the best Economy in the World, the envy of all. Get that big, beautiful plant in Ohio open now.”

GM issued a statement on March 17, saying that the future of the Lordstown facility will be resolved between GM and the UAW. The carmaker said it has “opportunities available for virtually all impacted employees” at plants that may close.

The company’s March 17 statement followed Trump’s criticism the same evening. The president said on Twitter that he had spoken to GM Chief Executive Mary Barra about the planned closure of the Ohio site, even though the economy is “booming.”

The president’s call with Barra followed his initial push for the company to act “fast” to keep the plant open or look for a new owner. Trump pointed out that Toyota is investing billions in the United States while the economy is doing well.

“MUST ACT QUICKLY,” Trump wrote on Twitter. “Time is of the essence!”

Barra was on a list of potential candidates to run as a vice president for Hillary Clinton, according to emails hacked from Clinton-campaign chair John Podesta and released by WikiLeaks. It’s unclear if she was interested in the role.

The United Auto Workers endorsed Clinton for president in 2016, discounting Trump after he advised automakers to run a tough bargain with the union.

The union is one of the richest in the United States, with more than 1 million active and retired worker members.

GM’s plant in Lordstown has cut two of the three production shifts since 2017, which eliminated 3,000 jobs, citing the declining sales of compact cars in favor of SUVs. In November 2018, the company announced the planned closing of Lordstown and four other plants, and the laying-off of 15,000 workers.

The plant stopped production March 6. The plant is the first of five GM plants slated to close this year. Lordstown was idle as the company determined its future, resulting in the loss of about 1,500 jobs.

GM noted that more than 400 Lordstown employees have accepted offers at other GM locations, and reiterated that jobs are available at other assembly plants for anyone willing to relocate to other states.

The 6.3-million-square foot Lordstown assembly complex has manufactured more than 16 million vehicles since it opened in 1966, including almost 2 million Chevrolet Cruze cars since 2010.

Unions are seen as one of the main culprits for the colossal loss of manufacturing jobs in the United States before Trump took office. While early unions helped broker deals between workers and owners, most were eventually infiltrated and co-opted by far-left and communist elements.

Under the premise of improving working conditions, the unions have inflated manufacturing costs. A study by the Heritage Foundation showed that the labor costs imposed by unions have made it hard for American carmakers to compete with Japanese brands.

“Unions function as labor cartels, restricting the number of workers in a company or industry to drive up the remaining workers’ wages,” James Sherk, a research fellow at the Heritage Foundation, wrote in a summary of the study. “Over time, unions destroy jobs in the companies they organize and have the same effect on business investment as does a 33 percentage point corporate income tax increase.”