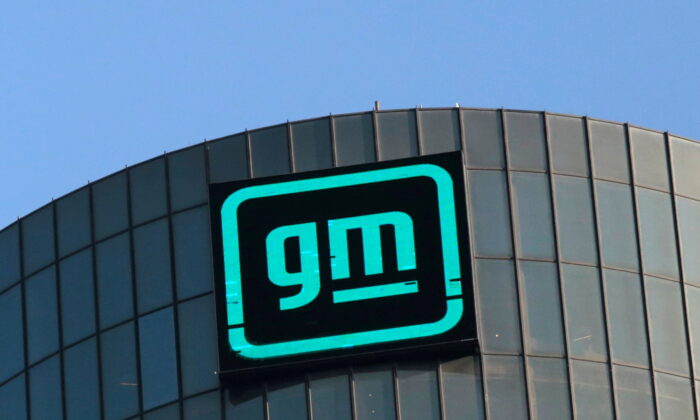 The new GM logo is seen on the facade of the General Motors headquarters in Detroit, Mich., U.S. on March 16, 2021. (Rebecca Cook/Reuters)
Business & Economy

GM’s net income dipped slightly to $2.9 billion in the quarter, compared with analysts’ estimates of $2.45 billion, as higher prices were not enough to offset an increase in costs.

But Chief Executive Officer Mary Barra delivered an upbeat message to investors: “We continue to see a strong pricing opportunity because there is demand for our product.”

GM shares were flat in after-hours trade at $38.

“While the results exceeded expectations, and marked a much-needed positive data point for the stock, we believe the core investor question is whether this earnings power can be maintained amid rising inflationary pressures,” Credit Suisse analyst Dan Levy said in a research note.

Barra said GM expects to build 25 percent-30 percentmore vehicles this year than last despite continued volatility in the supply of semiconductor chips, which the automaker expects to ease in the second half.

On the same day that rival Ford Motor Co launched regular production of its new F-150 Lightning electric pickup, Barra said GM has received 140,000 reservations for the new Chevrolet Silverado EV truck that is still nearly a year away from production.

GM reaffirmed a goal to build 400,000 electric vehicles this year and next, but in the latest quarter the company had just a 0.3 percent share of the electric vehicle market in the United States.

Barra said the company now will peg part of its executive compensation to EV performance targets, including sales volume and launch timing.

The automaker will begin selling the new Cadillac Lyriq electric SUV later this year in North America and China.

GM’s China equity income in the quarter was $234 million, down from $308 million a year ago. China revenue dropped to $9 billion, from $9.9 billion a year earlier.