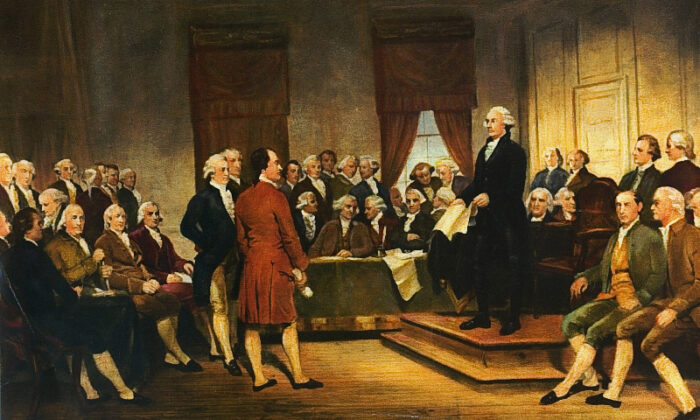 The 1856 painting "Washington at Constitutional Convention of 1787, signing of U.S. Constitution" by Junius Brutus Stearns. (TeachingAmericanHistory.org via Wikimedia Commons)
Viewpoints

Global Warming and the Constitution: How to Tell Whether a ‘Consensus’ Is True

The word “consensus” comes from a Latin root that means “feeling together.” Fundamentally, consensus is about feeling rather than thinking.

Alarmists claim there’s a scientific consensus of potentially catastrophic man-made global warming. Their solution is to grant more power to government. (In my view, that’s a solution like trying to improve the internet by putting more money into the U.S. Postal Service.)

In reality, of course, there’s no global warming consensus. Reputable scientists disagree among themselves over the extent of warming, how serious it is, what its causes are, and whether it’s continuing.

Unfortunately, it’s all too easy to create a consensus among academics. During my years as a professor, I learned how it’s done. There are three steps:

First, create a campaign idea that most professors want to believe. (It helps if the idea appeals politically to the left-of-center professoriate.)

Second, induce scholars from prestigious institutions to sign on. This will encourage other academics to get into line: Even though most academics claim to be egalitarian, they tend to follow whatever is prestigious. If the lead dog barks from a top institution such as Harvard or Yale, many others will join the chorus.

Third, reinforce the campaign with cash and other professional perks. Make sure there are plenty of grants, honors, prizes, conferences, travel, promotions, and professorial chairs for those who accept the consensus—and none for those who reject it.

Of course, not every academic consensus is wrong. A consensus is probably correct if it lives on without special-interest support, is backed by objective evidence, and survives numerous efforts to disprove it. A case in point is the modern consensus that the Earth rotates around the sun. But a consensus fueled by special interests should be immediately suspect. For example, both the sun-circles-Earth hypothesis and the mythical “energy crisis” survived contrary to evidence much longer than they should have, because strong political forces propped them up.

Social sciences are even more vulnerable to false consensus than physical science. A good example comes from my own field of constitutional law.

Before the states may ratify a constitutional amendment, that amendment must be proposed either by Congress or by what the Constitution calls a convention for proposing amendments. Law and history tell us that a convention for proposing amendments is a kind of convention of the states. This means it’s a negotiating session among delegations representing individual state legislatures. Conventions of the states (and, before independence, of the colonies), have met about 40 times over a span of three centuries. Their basic protocols are well established, to say the least.

Despite this, a small group of prestigious academics was able to create a consensus view that convention protocols are enigmatic and unknowable.

The story begins in 1963, when a growing number of states were demanding a convention to propose amendments reversing some unpopular Supreme Court decisions. Leading law professors opposed a convention. One of them—Charles Black of Yale Law School—penned an article warning that the makeup and protocols of a convention were total mysteries. In this and a later article, he argued that Congress should clarify matters by passing laws to control the convention.

Black’s essays were supported by very little research. Moreover, what little research he did was flawed. His suggestion that Congress govern the convention was particularly ludicrous because the very reason the Constitution authorizes such conventions is to enable the people to bypass Congress!

Despite the article’s deficiencies, Yale Law Journal published it. It didn’t take long for other academics to jump on the train. Within the next few years, Black was joined by professors at Georgetown University, Stanford University, the University of Michigan, Harvard University, and other prestigious institutions. The American Bar Association added a “study” concluding that convention protocols were unknown and it was up to Congress to establish them.

Thus, a consensus was born, and it lived on for decades.

When I started researching the Constitution’s amendment process, I believed the consensus, too.

Fortunately, I’m committed to follow wherever the evidence leads. I do so whether I like the results or not, and whether others (liberal or conservative) like them or not.

While studying the consensus writings, I was disturbed by the scanty, often faulty, research. The authors’ strong personal interest in frightening others away from a convention was obvious. I began to doubt the consensus.

Therefore, rather than rely on anything already written, I undertook an original search of historical documents, newspaper databases, and court cases. By doing so, I learned that an amendments convention isn’t mysterious at all.

I also learned that those espousing the consensus had overlooked—

• Two court decisions calling an amendments convention a “convention of the states.” One was issued by the Tennessee Supreme Court and the other by the U.S. Supreme Court.
• A substantial number of other cases explaining the amendment process.
• Numerous official and unofficial documents from the 1787–1790 constitutional debates labeling an amendments convention a “convention of the states.”
• Numerous 18th-, 19th-, and 20th-century newspaper and journal articles adopting the same label. Three of those articles appeared in The New York Times, a favorite paper among the academic elite. Two appeared in the Yale Law Journal—the same magazine that later published professor Black’s poorly researched essay.

I’m sorry to say that none of the law journals promoting the faulty consensus has ever retracted. None has ever published a corrective article. Indeed, some academics continue to double down on the false claims.

Fortunately, many Americans have since learned the facts. They have begun campaigns promoting a convention to propose amendments to fix our dysfunctional federal government.

The principal reason this didn’t happen earlier was that we were hampered by a “consensus”—one that turned out to be entirely false.

Rob Natelson was a law professor for 25 years. He is now senior fellow in constitutional jurisprudence at the Independence Institute in Denver. He is the most-published active scholar on the constitutional amendment process, the director of the Article V Information Center, and a senior adviser to the Convention of States project. His paper correcting the former consensus is available at https://papers.ssrn.com/sol3/papers.cfm?abstract_id=3516847.