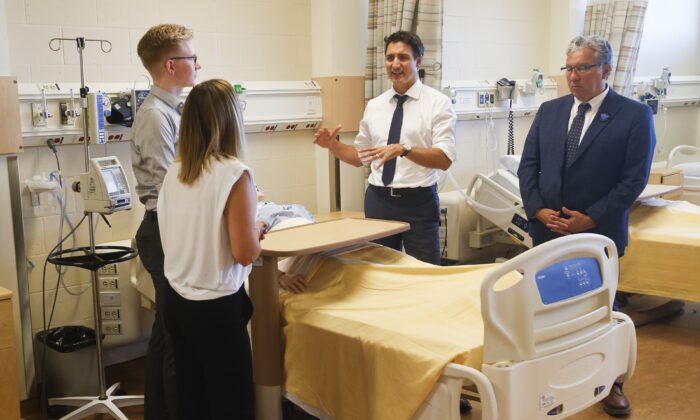 Getting ‘Up-to-Date’ with Vaccination Will Reduce Need for COVID Restrictions: Trudeau

Prime Minister Justin Trudeau says increasing COVID-19 booster uptake among Canadians is important to reduce the need for the type of restrictions imposed in recent years as winter approaches.

“If we are able to hit that 80, 85, 90 percent of Canadians up-to-date on their vaccinations, we’ll have a much better winter with much less need for the kinds of restrictions and rules that were so problematic for everyone over the past years,” Trudeau said on Sept. 1 while visiting the St. Boniface University in Manitoba.

While over 85 percent of the population has received at least one dose of a COVID-19 injection, just under 50 percent have received a booster dose, according to Health Canada.

“COVID is not done with us yet. We might want to be done with it, but it’s still around,” said Trudeau.

He added there’s a “real risk” of another wave as the temperature cools and people move indoors.

Health Canada also announced on Sept. 1 the approval of Moderna’s bivalent vaccine, which targets the Omicron BA.1 subvariant. The subvariants BA.5 and BA. 4 are currently dominant in Canada.

Previous vaccines available are geared towards the original strain of the SARS-CoV-2 virus which causes COVID-19.

Their effectiveness began dropping as the virus mutated, and data suggests protection against infection from Omicron is low and wanes quickly.

A recently declassified “Secret” briefing given to cabinet in June before the federal vaccine mandates were suspended on June 20 said the initial vaccines’ protection against infection and transmission is “20 percent or less in most studies by 6 months or more after vaccination.”

The briefing outlined three options for modifying the vaccine mandates.

The option the government chose to implement is described as “Temporarily suspend the PS [public service] and transport mandates, maintain the current mandate for travelers at the international border, and announce intention to transition to an up-to-date mandate in the Fall if health conditions warrant.”