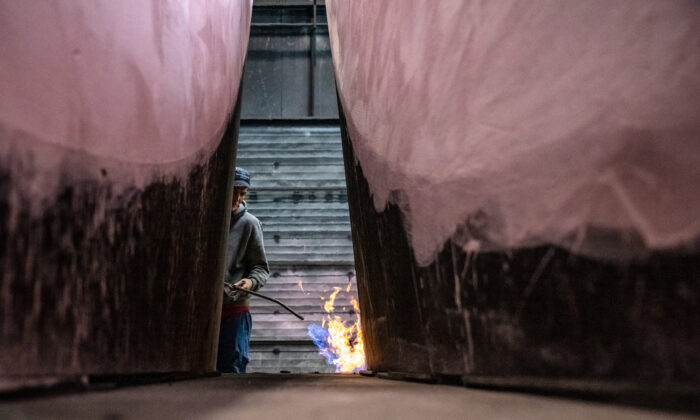 A worker uses a gas burner to prepare a casting mold at a foundry in Krefeld, Germany, on April 21, 2022. (Sascha Schuermann/Getty Images)
Recession

Germany ‘On Cusp of Recession’ as Business Confidence Plummets

German business confidence fell sharply in July, with both current and future indicators of sentiment taking a nosedive, according to the Ifo Institute, with its president warning that the country now stands “on the cusp of a recession.”

The overall index fell to 88.6 points in July, down from 92.2 points in June, the lowest since June 2020, the German research and policy institute noted on July 25.

The Ifo Business Climate Index is based on a survey of roughly 9,000 managers across various manufacturing and service industries in Germany.

German firms expressed a drop in confidence regarding their current situation, and they expect business to become “much more difficult” over the next several months, Ifo President Clemens Fuest said in a statement.

“Higher energy prices and the threat of a gas shortage are weighing on the economy,” Fuest said. “Germany is on the cusp of a recession.”

Pessimism Across the Board

All the various business sector gauges that make up the overall confidence index deteriorated.

The factory index “plummeted,” Fuest said, as pessimism in the manufacturing sector climbed to its highest level since April 2020, the height of pandemic lockdowns.

The service sector gauge “worsened substantially,” with the mood turning sour even in the tourism and hospitality industry that was recently buffeted by a wave of optimism as the tourist season got underway.

Morale in the construction industry “deteriorated notably,” with the future expectations component showing “deep pessimism” and the current conditions part of the index falling to its lowest level since April 2016.

The trade sector indicators also “took a nosedive,” Fuest said, noting that every single retail segment in Germany is pessimistic about the future.

The German economic outlook has deteriorated in the eyes of international agencies and analysts, with the International Monetary Fund (IMF) revising downward its expectations for gross domestic product (GDP) growth in Europe’s economic powerhouse amid soaring energy prices and inflation.

At the beginning of 2022, the German economy was showing signs of overcoming the problems that had held down economic growth in the year prior, the IMF wrote in a recent note.

“Supply bottlenecks that had hampered manufacturing were easing and services were opening up again as the country emerged from a severe winter wave of the Delta variant,” the agency wrote.

But that changed after Russia’s invasion of Ukraine and the disruption to energy markets as Western countries imposed sanctions that have hurt their own economies.

The IMF has downgraded its German GDP forecast for 2022 from 2.1 percent to 1.2 percent. The picture looks even bleaker for 2023, for which the IMF in April expected 2.7 percent growth but now predicts just 0.8 percent growth.

Inflation in Germany came in at an annual 8.2 percent in June, down from May’s pace of 8.7 percent, the federal statistics office stated.

The biggest factor was energy prices, which in June jumped by 38 percent over the year.

Analysts at ING said the dismal business confidence reading has confirmed their worry that Germany’s economy might have contracted in the second quarter.

“Today’s Ifo index illustrates that the list of downside risks for the German economy is getting longer and longer,” Carsten Brzeski, Global Head of Macro for ING Research, wrote in a note.

He said ING analysts see “more downside than upside risks to the outlook,” with the single biggest risk being more disruption to Germany’s energy supply.

“Currently, in the base case scenario with continuing supply chain frictions, uncertainty and high energy and commodity prices as a result of the ongoing war in Ukraine, the German economy will be pushed into a technical recession,” Brzeski wrote.