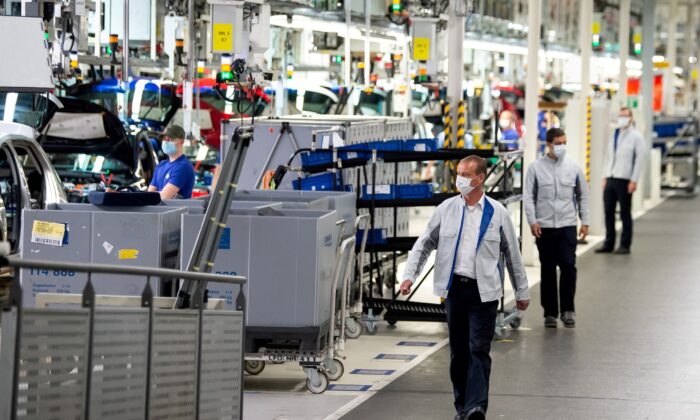 BERLIN—German industrial output suffered its steepest drop in August since April last year, due to supply chain disruptions that are holding back growth in Europe’s biggest economy and hitting the auto sector particularly hard, official data showed on Thursday.

The Federal Statistics Office said industrial output fell by 4.0 percent on the month after an increase of 1.3 percent in July. A Reuters poll had pointed to a decline in August of 0.4 percent.

“Manufacturers continue to report production constraints due to supply shortages of intermediate products,” the office said in a statement.

Production of cars and car parts fell by 17.5 percent on the month.

German car companies are struggling to meet a post-pandemic surge in demand since the start of the year, due to a lack of microchips and other intermediate products.

Carmaker BMW said its group deliveries were down 12.2 percent in the third quarter, hit by the microchip crunch.

“We will definitely deliver less than we could have sold, and that also applies to next year,” he said, adding that it was impossible to say how big the shortfalls would be.

“It’s a fight for every chip,” he added.

However, the Munich-based Ifo economic institute said separately that its survey of production expectations rose in September.

Thomas Gitzel, economist at VP Bank, said “if the flow of materials gets going again, the conditions are in place for a strong upturn in industrial activity.”

Carsten Brzeski, at ING, said that for now it looked like that upturn would “come rather later than sooner.”

By Paul Carrel and Rene Wagner