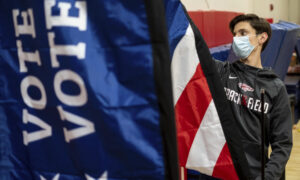 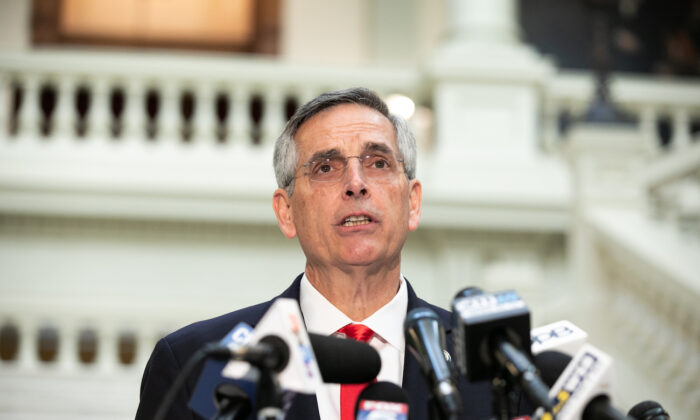 “After wait times averaging just 2 minutes on November 3rd, Georgia’s election administration is hitting a new milestone for effectiveness and efficiency,” Raffensperger said in a statement. “I have always said that after every election, half the people will be happy and half will be disappointed, but everyone should be confident in the reliability of the results.”

Raffensperger acknowledged an issue cropped up in Columbia County. He said a small number of keys that start up paper ballot scanners and a few poll worker cards were programmed incorrectly, resulting in some poll workers being unable to start the touch screen voting machines used to count paper ballots.

“The correct keys and voter cards were delivered to the relevant precincts with a law enforcement escort. Issues were resolved by 10am,” Raffensperger’s office said.

President Donald Trump highlighted the issue, writing on Twitter around 2 p.m. that “reports are coming out of the 12th Congressional District of Georgia that Dominion Machines are not working in certain Republican Strongholds for over an hour.”

“Ballots are being left in lock boxes, hopefully they count them,” he added.

He appeared to be referring to callers who told Georgia radio host John Fredricks that they weren’t able to cast their votes in the 12th Congressional District because of malfunctioning machines. The callers said workers told them to put their ballots into a box, and assured them the ballots would be scanned when the machine issues were worked out. Fredericks discussed the issue on Steve Bannon’s “War Room” earlier Tuesday.

Gabriel Sterling, a top official working out of Raffensperger’s office, responded to Trump on Twitter, writing the issue in Columbia County “was resolved hours ago and our office informed the public about it in real time.”

“The votes of everyone will be protected and counted. Sorry you received old intel Mr. President,” he added.

The runoffs are happening because none of the candidates received a majority of the votes in the 2020 election.

Loeffler and Warnock emerged from a free-for-all election to finish the term of Sen. Johnny Isakson (R-Ga.), who retired in 2019. Whoever wins will spend two years in office.

The winner of the other race will get a full, six-year term.

The races drew nationwide attention because they could determine control of the Senate.

If Democrats win both and secure the White House, they’ll hold the upper congressional chamber via the tiebreaking vote a vice president can cast. Republicans need to win just one, or the White House, to keep control of the Senate.

Democrats maintained control of the House of Representatives but saw their majority shrink considerably, with Republicans flipping roughly a dozen seats.

Polls opened at 7 a.m. on Tuesday and will close at 7 p.m. It may take days to certify the winners.

Some 3 million people voted by mail or in person during early voting, Raffensperger’s office said Monday. That set a new record, breaking the previous high of 2.1 million in 2004’s runoff election.