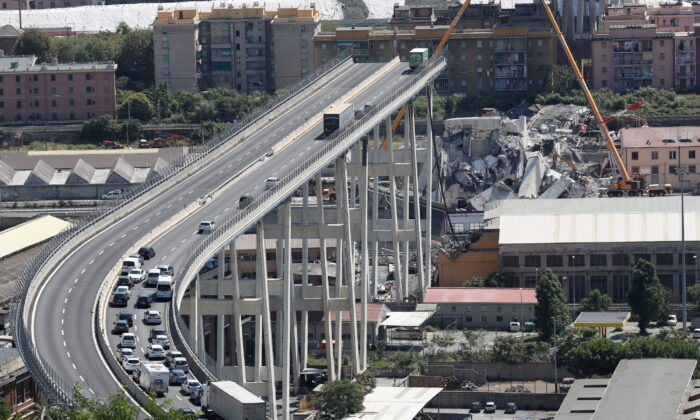 The collapsed Morandi Bridge is seen in the Italian port city of Genoa, Italy on Aug. 16, 2018. (Stefano Rellandini/Reuters)
Europe

GENOA, Italy—The trial of 59 people facing an array of charges over the deadly collapse of a motorway bridge in the Italian port city of Genoa opened on Thursday in front of relatives of the victims, but then adjourned for the summer.

The judge said proceedings would resume on Sept. 12 and scheduled hearings up to July 2023. Given the complexity of the case, sessions are likely to continue beyond that date.

The Morandi bridge, operated by Atlantia’s motorway unit Autostrade per l’Italia (Aspi), collapsed at the peak of the summer holiday season on Aug. 14, 2018, killing 43 people and laying bare the state of Italy’s crumbling infrastructure.

The defendants face charges ranging from multiple manslaughter to making false statements. They have all denied the accusations.

Amongst those in the dock are former Atlantia CEO Giovanni Castellucci, who is accused of endangering safety on the roads and of wilful failure to take precautions to prevent disasters. He faces a maximum sentence of 15 years in jail if convicted.

“I hope that a truth emerges that will be as objective as possible. Above all, I hope that no summary justice is carried out,” said Guido Alleva, one of Castellucci’s lawyers.

The trial is taking place in the largest hall in the Genoa court, while a marquee with video screens has been set up outside to accommodate hundreds more members of the public and journalists who want to attend.

Prosecutors have compiled a list of 178 witnesses who they want to call, including Aspi’s current CEO Roberto Tomasi and two former infrastructure ministers.

“The trial is expected to be long and complex,” said Egle Possetti, spokesperson for the victims’ relatives committee, whose sister, brother-in-law, and two nephews died in the collapse.

“We hope that there will be no loopholes to interrupt the thread of truth and justice that has already emerged in the investigation,” she added.

Chief prosecutor Francesco Pinto said his main concern was that the trial might drag on for too long, making it impossible to reach a final verdict before the statute of limitations kicked in, automatically ending legal proceedings.

“Unless this is done in a reasonable time, there will be no justice worthy of the name,” he told reporters.

Judge Paola Faggioni, who in April ordered the trial, has also accepted a financial settlement proposed by Autostrade and its sister company SPEA to close the case against them.

The collapse caused a dispute between Atlantia, controlled by the Benetton family, and the government that ended last year with the sale of Atlantia’s controlling stake in Autostrade.