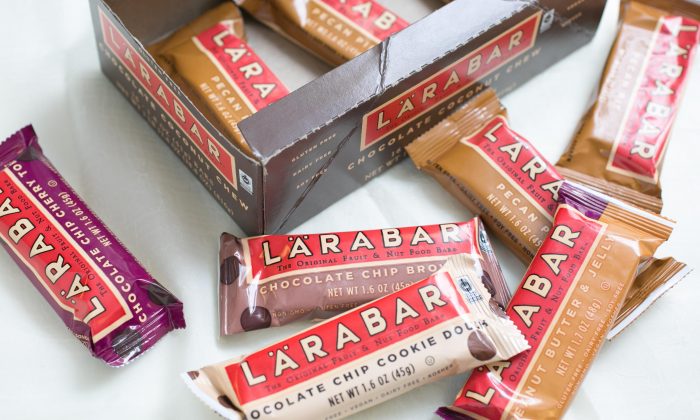 In the process of promoting the clean ingredients of Larabar, it is critical of products with artificial ingredients, of which Minneapolis-based General Mills has many. Of the corporation’s $17.6 billion sales in fiscal 2015, its natural product sales accounted for less than one-thirtieth.

It is true that the company that got its start in 1880 with Gold Medal flour is still best known by Americans for its Lucky Charms, Cheerios, Pillsbury, Haagen-Dazs, Old El Paso, and Green Giant brands.

But General Mills has actually seen its highest growth within its natural and organic product lines, which include Larabar—double-digit growth for three years, with no end in sight.

In fact, General Mills is now the fourth-largest natural and organic food manufacturer in the United States, according to the company’s 2015 annual report.

It looks like a paradox, that General Mills would support a campaign that knocks food dyes, syrups, and preservatives.

Incremental changes to its entire product lineup over the last decade are also moving in the direction of more whole grains and fewer calories.

To date, the company has improved 76 percent of its U.S. retail products by at least 10 percent. Either 10 percent more whole grains, fiber, vitamins, and minerals, or 10 percent less sodium, trans fat, sugar, and calories—or both.

“Recently what we’ve noticed is that more and more consumers are looking for simple, real foods,” said Rosanne Ranta, marketing manager for Larabar, speaking to Ad Age about the new campaign. “We think that this is a perfect time to tell everyone what Larabar is all about,” she added.

Titled “Little Boxes,” the 63-second commercial sets up a contrast of “little boxes in the food store … filled with ticky tacky” with Larabar’s colorful boxes filled with real food.

The ad is a very catchy musical jingle from start to finish, performed by the band Lucius, according to Ad Age.

While the viewer looks at stacks of plain cardboard boxes, the jingle goes: “Some have food dyes and syrups, and they’re made with preservatives. So we end up made of ticky tacky and we all feel just the same.”

When it gets back to Larabar, made of “fruits, nuts, and spices,” the visuals shift to a family, first mom looking out the window, then children playing outdoors under a colorful geometric play set, then dad stuffing colorful bars into his shirt pockets. The jingle suggests “we can change” the little boxes in the food store, which is a subtle call to buy Larabar.

Larabar was founded in 2002 by Lara Merriken, who got the idea while hiking in the Colorado Rocky Mountains. The idea was to make a bar made only of fruit and nuts, and nothing else. The bars rose in popularity to become a category leader, and in 2008, General Mills acquired Larabar, with Merriken agreeing to stay on with the company.

Today, Larabar comes in 21 flavors, including Apple Pie, Banana Bread, Blueberry Muffin, and Chocolate Chip Brownie. None have more than nine ingredients, and the Cashew Cookie flavor is famous for having only two: cashews and dates.

A series of 15-second commercials that complement “Little Boxes” highlights the Cashew Cookie flavor and others.

The brand story that Merriken represents is a powerful one in an age where consumers are increasingly craving simplicity.

“In this day and age, we are all filled up with so many things, and a lot of what we are filled up with is distraction, so when you find something that’s simple, easy to understand, and makes your life better, I think people gravitate toward it,” Merriken says in a video posted on Larabar’s YouTube feed.

For General Mills, Larabar is part of a growing category of natural and organic foods that it has been working on for 15 years. Some of its other brands include Cascadian Farm, Muir Glen, Immaculate baking products, Food Should Taste Good snacks, Liberté yogurt, and most recently Annie’s.

The company says the category’s growth is driven by changing consumer preferences for natural products.

It looks like a paradox, that General Mills would support a campaign that knocks food dyes, syrups, and preservatives when some of its own product portfolio contain these, but the company compartmentalizes well.

In the summer of 2014, General Mills launched 150 new products that tap into consumer trends, according to a press release.

These products include those you would consider part of the natural health trend, products such as Larabar Renola grain-free granola for the gluten intolerant among us, Cheerios Protein to satisfy that craving for satiation, and Green Giant Steamers, which “takes the guesswork out of preparing dishes that combine vegetables and whole grains.”

It also includes products that would be considered antithetical to anyone’s idea of natural.

To cater to the 39 percent of people who seek new or ethnic flavors, it created Chex Mix Xtreme Sweet & Spicy Sriracha, with 27 ingredients, including distilled Monoglycerides, Maltodextrin, Disodium Inosinate, and BHT.

It also created Pillsbury Melts Molten Fudge Cake Filled Cookies to cater to that sweet indulgence that the company says most people want. This product has a whopping 50 ingredients, including five artificial dyes, corn syrup, and artificial preservatives—everything Larabar told us was “ticky tacky.”