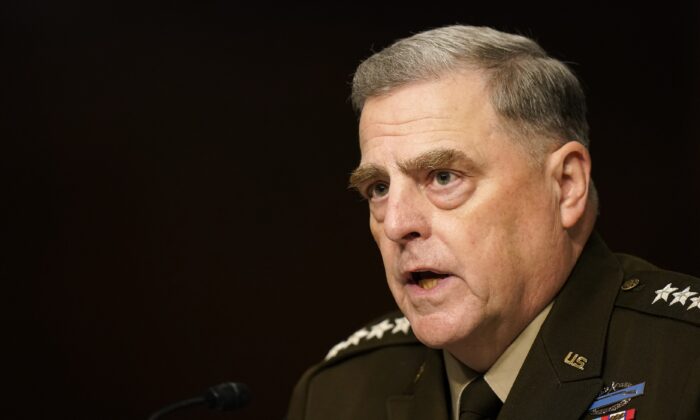 Chairman of the Joint Chiefs of Staff Gen. Mark A. Milley speaks during a Senate Armed Services Committee hearing on the conclusion of military operations in Afghanistan and plans for future counterterrorism operations on Capitol Hill on Sept. 28, 2021. (Patrick Semansky/Pool/Getty Images)
Military

China is unlikely to use military force to seize Taiwan in the near future, but the country’s communist regime does pose a serious threat not only to the self-ruled island, but also to the United States, Gen. Mark Milley, chairman of the Joint Chiefs of Staff, said on Nov. 3.

“Based on my analysis of China, I don’t think that it is likely in the near future—being defined as six, 12, maybe 24 months, that kind of window,” he said in response to a question about it.

Milley made the remarks while speaking at the Aspen Security Forum, an annual three-day security and foreign policy conference presented by the Washington-based Aspen Strategy Group.

“Having said that, though, the Chinese are clearly and unambiguously building the capability to provide those options to the national leadership, if they so choose, at some point in the future. But near future, probably not. But anything can happen.”

The communist regime in China sees Taiwan as part of its territory, to be taken by force if necessary. Chinese leader Xi Jinping has previously said he wants to apply the regime’s governance model for Hong Kong, known as “one country, two systems,” in Taiwan, as a way to bring the island under Beijing’s control.

Taiwan, a de facto independent country with its own military, democratically elected officials, and constitution, has been facing China’s coercion for years. Beijing has held military exercises in its coastal waters and flown military jets into the island’s air defense identification zone as a way to intimidate the island.

In October, Taiwan’s defense minister said that China will be capable of mounting a full-scale invasion of the island by 2025.

Currently, Washington and Taipei aren’t formal diplomatic allies. However, Washington is required by the Taiwan Relations Act to provide the island with military equipment for its self-defense.

Milley also said the United States has the capability to defend Taiwan.

“We absolutely have the capability to do all kinds of things around the world, to include that if required,” he said. “There’s no question about that.”

China’s military has changed drastically in the last 40 years years, Milley said, and the communist regime isn’t hiding its ambition.

“So 40 years ago, it was a very large infantry that was peasant-based and mostly army. Today, it has capabilities in space, cyber, on land, sea, air, underseas; and they are clearly challenging us regionally,” he said.

“They’ve been very clear about that. They have a China dream, and they want to challenge the so-called liberal, rules-based order that went into effect in 1945 at the end of World War II. They want to revise it.”

In other words, the Chinese regime “wants to revise the international order to their advantage,” Milley said.