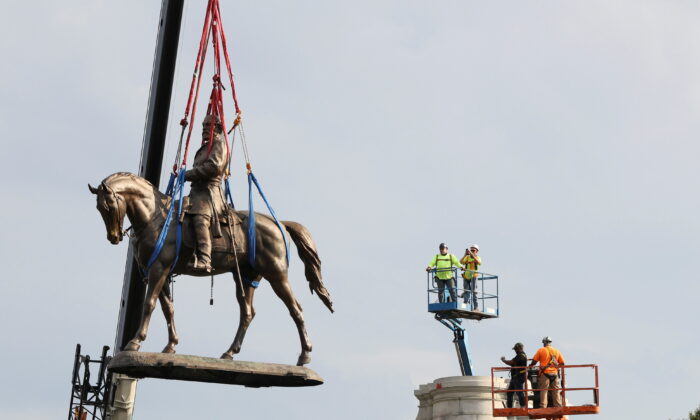 The statue of Confederate General Robert E. Lee is removed by a construction team in Richmond, Va., on Sept. 8, 2021. (Evelyn Hockstein/Reuters)
Viewpoints

Earlier this month, a 21-foot-tall bronze statue of Robert E. Lee—perhaps the most famous monument to the Confederate general—was removed from Monument Avenue in Richmond, Virginia. Supporters of the statue’s removal, including Virginia Gov. Ralph Northam (D), hailed the event as a triumph for racial justice.

The left has decided that Lee, the most recognized and celebrated figure of the Confederacy, is intolerable, a man who should be erased from American history. This maelstrom surrounding Lee has reached a fever pitch in recent years, as the woke movement has grown.

In short, anyone who dares mention Lee at all better demonize him as pure evil or else face the wrath of the progressive mob. This is retroactively imposing cancel culture on the past, while silencing free speech today.

In this context, Allen Guelzo’s newly released biography on the Confederate general, “Robert E. Lee: A Life,” is especially welcome and important.

We need to be able to study history in a mature and unsentimental manner, examining the past honestly and insightfully regardless of the subject matter. Guelzo does this with remarkable success in his new and engaging book.

Guelzo, an award-winning historian and best-selling author, is director of the James Madison Program Initiative on Politics and Statesmanship and senior research scholar in the Council of the Humanities at Princeton University. I had the pleasure to discuss Lee with him on the latest episode of my podcast, “Newt’s World.”

In his book, Guelzo has the audacity to look at Lee objectively, as a man of great consequence who is worth remembering. Yes, Lee committed treason and fought for the Confederacy, which wanted to uphold the institution of slavery. But it would be childish—and the height of folly—to use that as a reason not to study him. Yet, this is precisely what many people are advocating today.

Indeed, we’re witnessing an attack on history from the woke left. In recent years, we’ve seen a relentless effort by progressives not to reexamine America’s history honestly but instead to rewrite and even erase it. This is wrong.

Standing up for history doesn’t mean standing up for the values of Lee or any other flawed person. It means standing up for the fact that they are a significant part of American history and deserve to be studied as part of our nation’s past. And, in the case of Lee, studying the role of slavery and the Civil War helps us better understand America—our scars, where we come from, the ongoing fight for freedom, and how to learn from the past to create a better future.

As Guelzo explains, Lee was a complex figure who had to make tough decisions in situations not of his making. For example, his decision not to accept command of the American Army just before the outbreak of the Civil War was motivated by multiple complicated factors. And Lee didn’t just proceed to join the Confederacy overnight. In fact, he initially remained neutral and wanted to broker a peace settlement to reunite the country over time. He didn’t want secession.

These are important and fascinating bits of history that get lost amid the zealous attempts of the left to erase select aspects of our past.

Lee was also a brilliant military general, a master tactician on the battlefield and the only Confederate commander with a true strategic vision for victory. He’s certainly worth studying for this reason as well.

If we wish to unite as a country and alleviate some of the damaging political polarization that has taken hold, we need to understand who we are. That means Americans must be able to study, confront, and embrace our nation’s history—scars and all—not erase it. A good place to start would be to read Guelzo’s new biography on Robert E. Lee—not to endorse what Lee did, but to recognize he’s more than some caricature and worth remembering.