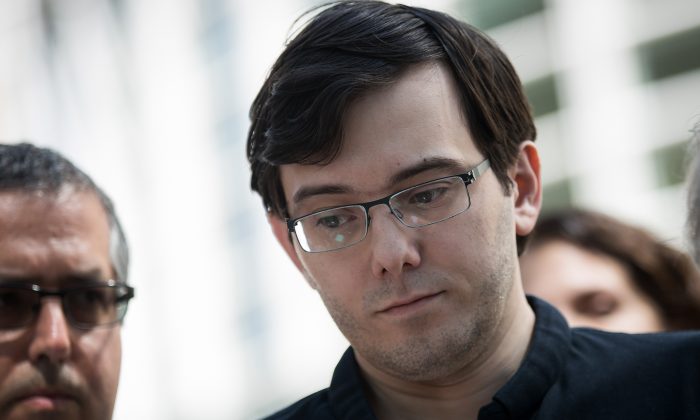 Former pharmaceutical executive Martin Shkreli pauses while speaking to the press after the jury issued a verdict in his case at the U.S. District Court for the Eastern District of New York in the Brooklyn borough of New York City on Aug. 4, 2017. (Drew Angerer/Getty Images)
US News

The Federal Trade Commission (FTC) and the states of New York, California, Illinois, North Carolina, Ohio, Pennsylvania, and Virginia are set to recoup up to $40 million in relief for victims of an illegal scheme masterminded by Martin Shkreli.

The FTC said in a press release Tuesday that the government agency, alongside several states, accuses Vyera Pharmaceuticals and Shkreli, its former CEO, as well as his associate Kevin Mulleady, and Vyera’s parent company Phoenixus AG of fleecing patients dependent on the life-saving drug Daraprim through the illegal scheme.

According to the FTC, Shkreli and his associate violated antitrust laws when they hiked the price of Daraprim by 4,000 percent and then “concocted an elaborate web of restrictions to illegally block competitors from producing a cheaper option.”

Daraprim, also known by its generic name Pyrimethamine, is used in conjunction with other medications such as sulfonamide, to treat the serious parasite infection, toxoplasmosis. It is also used in the treatment of individuals with human immunodeficiency virus (HIV), according to WebMD.

The FTC said that it filed an order in court on Tuesday, which follows a January 2020 complaint against the accused, that shuts down the illegal scheme. The order also bans Mulleady from the pharmaceutical industry and requires Vyera and Phoenixus AG to pay up to $40 million in equitable monetary relief for victims.

The January complaint alleges that Shkreli and Mulleady launched Vyera with a plan to purchase Daraprim, dramatically raise its price, and use anticompetitive contracts to block competition.

The company then sought to block out the competition through various ways, such as entering into resale restriction agreements with distributors that prevented generic companies from procuring the drug for FDA-mandated testing. Vyera’s scheme “delayed generic competition for years and caused tens of millions of dollars in harm to consumers,” the complaint alleges.

Shkreli was widely criticized for several comments he made defending the price increase and on social media.

Mulleady will now be banned from working for, consulting for, or controlling a pharmaceutical company for the next seven years, and risks a $250,000 suspended judgment if he is found to have violated the terms of the order.

Of the $40 million in relief for victims, $10 million is guaranteed upfront and up to $30 million more is payable over 10 years if the companies’ financial condition improves.

Vyera and Phoenixus are also “required to make Daraprim available to any potential generic competitor at list price, and to provide prior notification of any planned pharmaceutical transaction valued at $25 million or more,” the FTC said.

“Mulleady, Vyera, and Phoenixus also are prohibited for 10 years from engaging in any conduct similar to what the FTC and the states alleged in their amended April 2020 complaint,” the agency said.

Shkreli, who allegedly pioneered the scheme and continued to mastermind it from prison, is set to begin trial later this month.

He is currently serving a seven-year prison sentence after he was convicted in 2017 of lying to investors about the performance of two failed hedge funds that he was running. He was also slapped with a fine of about $7.4 million.

The Epoch Times has contacted Vyera Pharmaceuticals for comment.

“Today’s action puts money back in the pockets of drug patients fleeced by a monopolistic scheme,” said FTC Chair Lina M. Khan. “Martin Shkreli masterminded an elaborate plan to dramatically jack up the price of life-saving drug Daraprim by blocking cheaper options. While litigation against Shkreli continues, the order shuts down the illegal enterprise run by his companies, Vyera and Phoenixus, and bans his associate from the industry. This strong relief sets a new standard and puts corporate leaders on notice that they will face severe consequences for ripping off the public by wantonly monopolizing markets.”