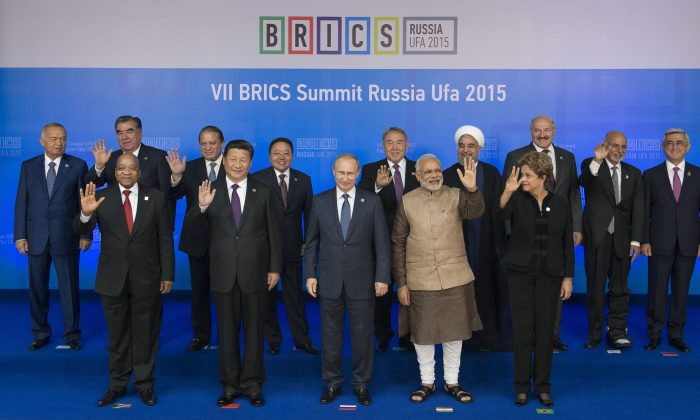 Leaders of the BRICS and the Shanghai Cooperation Organization (SCO) during the BRICS/SCO Summits in Ufa, Russia, on July 10, 2015. (Alexander Vilf/Ria Novosti via Getty Images)
Business & Economy

Over the past three decades, global interest in emerging markets has soared, and when the financial crisis of 2008 hit, emerging markets were largely thought to be the next engine of global growth.

Insofar as they have complied with this investor aspiration over the past few decades, they have also adopted a negative aspect of the developed economies to which they aspired: corporate leverage. As the corporate emerging giants of the developing world have grown, so too have they issued debt at disproportionately faster rates.

Emerging markets are now saddled with more debt than ever before, but in particular, the debt assumed by the largest corporations in emerging markets has swelled to unforeseen levels.

This isn’t a trivial issue in global finance: in 2014 corporate emerging market bonds as an asset class represented more than $1.6 trillion.

The market is beginning to grow weary of this additional leverage-induced risk, which is why the jitters for emerging markets are now worse than those during the Asian financial crisis. They have received a painful correction over the past month that is raising intense worries among investors.

Furthermore, the ramp-up in corporate leverage has not been uniform across emerging markets, with corporates in the larger economies being the hungriest, including China, India, Brazil, and Turkey.

The global monetary conditions had in recent years been very favorable towards corporate borrowing in emerging markets for a couple of reasons. First, as monetary policy in developed countries was loose, the central banks of emerging countries were setting lower policy rates as well in order to avoid pressures on their currency to appreciate. Second, loose monetary policy in developed countries also led to investors pouring money into emerging markets in the “hunger for yield.”

My ongoing research examines the impact of corporate leverage in emerging markets from a slightly different perspective: the difficulties for legislative fiscal institutions in oversight of debt. If corporations are larger holders of emerging market debt, how does the transparency and budget oversight capacity of legislatures in these countries change? Many emerging markets have undertaken governance reforms over the past decade to try to make their national budgets accountable. This has helped to improve political oversight of debt and make their fiscal positions more open and manageable.

However, the problem arises when debt is held by privately listed corporations, which have not been part of the reforms in emerging markets towards higher disclosure. Does this worsen the risks to fiscal sustainability and democracy if corporations amass debt on their balance sheets? How would national oversight bodies even know? These are some the questions my ongoing research attempts to address.

This is exacerbated by the increasing attractiveness of the United States as a destination to park money while the Federal Reserve raises interest rates and thus enhances the price of storing money in American dollars.

Corporations in emerging markets cannot get away with the same balance sheet risks as developed-market corporations. They must therefore start to exercise greater caution vis-à-vis their balance sheets. Some of the noteworthy policy options prescribed by the experts include: monitoring vulnerable and systemically important firms, improving the transparency of data on corporate sector finances, turning to macro-and micro-prudential policies, and reforming insolvency regimes.

Experts on the more pessimistic end say the emerging market sell-off might portend the “third wave” of the 2008 economic crisis (following the American and European waves), and that the age of BRICs might be over before it really began.

Usman W. Chohan is a doctoral candidate in policy reform and economics at the University of New South Wales in Australia. This article was originally published on The Conversation.