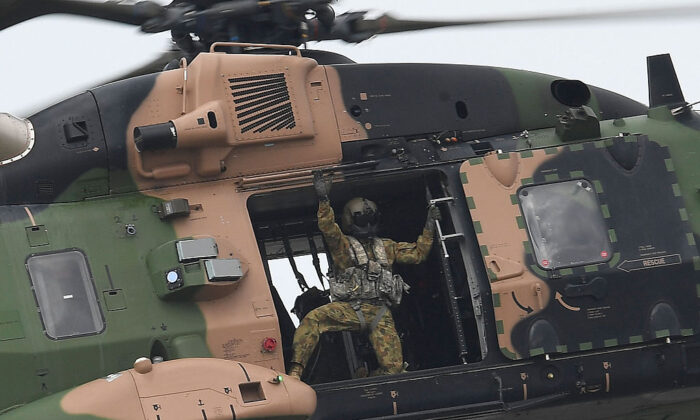 A loadmaster from an Australian Army MRH90 Taipan helicopter waves to the crowd as it performs during the T150 Defence Force Air Show in Townsville, Australia, on Oct. 15, 2016. (Ian Hitchcock/Getty Images)
Australia

Defence Minister Richard Marles has said French urgings to keep the Australian defence forces fleet of Taipan helicopters will not be taken into consideration, and instead, the government will rely on what was the right thing to do for the nation’s interests.

Australia is currently reviewing the program and capability of its Taipan helicopters after well documented ongoing issues with the fleet’s operating costs, while France is urging for the program to stay.

“We’ve been really clear about the issues that we faced with the Taipans and we’re looking at ways in which we can make sure that we continue a troop carrying capability going forward in a way which delivers a value for money capability for the Australian Defence Force,” Marles told reporters.

He said it was expected that the French would advocate on behalf of their own defence industry, but the final decision of the review will be made “in Australia’s national interest.”

“We will be very honest and very open with France; that’s really how we’re seeking to do a reset with France,” Marles said.

Australia’s relationship with France soured after the previous Australian government cancelled the $90 billion (US$60 billion) diesel-powered submarine program with a French defence contractor in favour of at least eight nuclear-powered submarines from the United States as part of the AUKUS agreement.

Soon after scrapping the submarine program, the Morrison government announced it would retire the fleet of 41 Taipan helicopters in favour of U.S. Black Hawks.

“For the interoperability with the U.S. and Australia, which is increasingly important for us given the instability in our region, the Black Hawk made perfect sense,” former Defence Minister Peter Dutton said in 2021.

At the time, Marles agreed that the Black Hawks would be “fantastic” but criticised the number of defence projects that were being scrapped.

Presently, the Albanese government was confident in the way it was rebuilding its relationship with France, Marles said.

“I am confident that we will be able to navigate this issue in the context of building our relationship with France.”